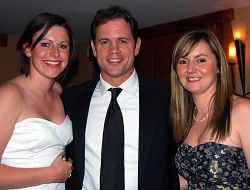 Staff and students from Harper Adams University College joined the leading lights of the British meat industry at a national awards event this week.

Harper’s BSc Agri-food Marketing with Business Studies course was a finalist in the Best Training Scheme category at the Meat Management Awards 2009.

Finalists, sponsors and other industry representatives united at the Royal Garden Hotel, Kensington, London, for the dinner and awards arranged by Meat Management Magazine. Many of the companies represented have strong links with Harper Adams, through industrial placements and the employment of graduates.

Meeting Kyran was the final highlight of a busy day for students Catherine Matthews and Caroline Dyke, who had sat their final Harper Adams exams that morning. Both have completed the nominated degree course, and will graduate from Harper Adams this September.

The training scheme award was won by the Red Meat Industry Forum. 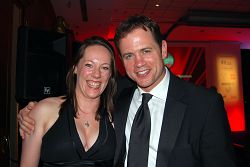