Aimhigher Associates is the first scheme of its kind to build long term links between university students and school/college pupils from disadvantaged backgrounds to help raise educational aspirations.

Undergraduates are recruited to become Associates, using their personal experiences to encourage and support pupils as young as 13 to make the most of their talents. Aimhigher Shropshire, Telford and Wrekin was one of 17 areas involved in the pilot phase, and has already recruited 21 undergraduates who have provided advice and guidance to a total of 69 school and college pupils.

“We talked about university accommodation and finances, including playing a finance ‘choice or chance’ game, which left one pupil £5,000 in the red at the end of the financial year, and another with £700 left in his pocket. It shows that they have to be careful!” explained Stephen.

James said: “I was working with Year 12s, and with the move to higher education being closer for them, we focussed a lot on applying to universities – doing UCAS course searches and working on personal statements."

Rebecca Lindley said: “I think it has really helped some of them, especially those who hadn’t even considered university as an option for when they finish school. If people have the potential, then it’s silly to rule all the options out simply because they are unsure. I think it’s important to focus on what you want. If I had, it might not have taken me so long to find the right course!”

“I agree,” added Carla. “I started a different uni course out of school and it wasn’t for me. I was doing geography, but now I’m studying Rural Enterprise and Land Management at Harper Adams and I’m finally in the right place. If you go into higher education, you have to do it for the right reasons and follow your own aspirations – not those of your teachers, parents, friends or anyone else. I hope we’ve helped the Bishop’s Castle pupils to see that.”

So how do the associates benefit? “I think Carla has become more confident since we started,” says Rebecca. “I suppose I have,” adds Carla, “but it’s also satisfying to see the pupils come round to it, to accept us and open up to us – eventually!”

The four associates hosted their final session on the Harper campus. The school pupils toured the college and its adjoining farm, seeing the teaching and social areas, sitting in a short lecture and doing a practical tutorial in the pig unit. They even had a trip or two around the off-road vehicle track in an armoured personnel carrier used by engineering students.

The pupils seemed to enjoy the day out of classes, but what about the whole experience? Has it really made a difference?

Kieran Woodward, 15, says: “It has inspired me to go to uni. I wasn’t planning to before, but they have helped me out and changed my mind.  I don’t know what I want to study yet, but I’ve been set on the right track.” Kieran added that he also wouldn’t be worried about going far from home to study – as long as the course was right.

Jake Wall, 14, was already planning on a move into higher education, but would still recommend the scheme to others: “Now I have more knowledge about my options and about the finances and accommodation – I didn’t know much about that, so it has really helped.”

Karen Hayward, Director of Aimhigher Shropshire, Telford & Wrekin, says: “Aimhigher Associates is unique because we aim to pair school pupils with an undergraduate student who comes from a similar background. This means the Associate can empathise with the anxieties felt by pupils whose families don't have a history of higher education, and provide practical advice based on their own experience.”

Aimhigher Associates, which has received £21m of Government funding over three years, was officially launched in London on Tuesday, June 9, during the first national Aimhigher Week. 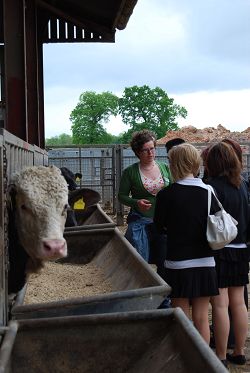