Harper goes to the hospitality Oscars 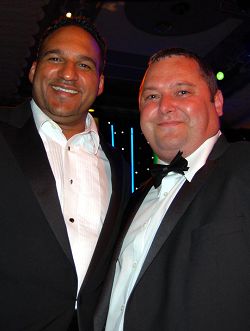 Members of the catering team at Harper Adams University College last night rubbed shoulders with renowned chefs and some of the biggest names in the business at the hospitality industry’s Oscars.

Harper Adams was one of three finalists in the Sustainable Business category of the Catey Awards 2009, run by Caterer and Hotelkeeper magazine, competing against the famous Gleneagles Hotel and the UK’s leading contract caterers Baxter Storey.

Baxter Storey took home the award from the Grosvenor House Hotel, London, but the Harper Adams staff still felt like winners. “To be here, and be up against such key players, is a real honour,” said General Catering Manager David Nuttall. “Compared to our operation, they are really big businesses and I’m thrilled that the judges thought we were doing enough good work to stand shoulder-to-shoulder with them here tonight.”

Making the night extra special for the hard working catering team members was the presence of some of the best chefs in the country – known in the industry for much more than their TV appearances. “When I started working at Harper Adams, a small university in the Shropshire countryside, I didn’t think it would lead to me sitting here at the Grosvenor, with Gary Rhodes on a table to one side and Michael Caines to the other,” said Head Chef Wayne Wright.

“And it’s an honour to have been able to personally congratulate Raymond Blanc on receiving the lifetime achievement award at what really is the biggest awards event for our industry.”

The University College’s entry for the Cateys was compiled by business degree student James Smith, 21, from Malinslee, Telford, who will be returning to his final year studies in September, after a placement year working in the catering office. Mr Nuttall added: “James has been a true asset to the Catering Department and should be proud that his entry took us so far – this will look brilliant on his CV, and we are extremely grateful to him for all his hard work.”

The Harper Adams Catering Department has established a number of initiatives to reduce waste and cut its carbon footprint, and given its full support to cross-college sustainable developments.

Activities include: securing Fairtrade status, switching to tap water (now that the campus has its own bore hole for supply); more produce for the college farm used on menus, development of meat hanging fridges plus butchery training to support use of Harper Adams pork and lamb, 70 per cent of kitchen waste recycled and incentives to support other green activities, for example, free meals for cyclists on bike to work day.

Harper Adams, in Shropshire, is committed to practising what it preaches when it comes to sustainable food and farming, and that commitment has been rewarded with four national sustainability award nominations in the last year, which have led to one win (Times Higher Education Awards 2008) and a highly commended (Green Gown Awards 2009).