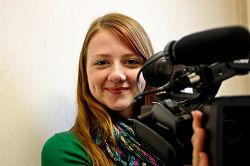 Harper Adams University College is delighted to announce the appointment of Janine Heath as its new video journalist.

“The post has been created to expand the services offered by the Harper Adams press office,” said Corporate Communications Manager Jaclyn Green. “And we were truly fortunate to find a candidate who is not only an award-winning broadcast journalist, but also has a solid understanding of and passion for the agricultural sector, which is vital given the specialist nature of the university college.”

Staffordshire-born Janine, 22, was raised in the village of Endon, north east of Stoke on Trent. Her father is an agricultural engineer and her grandfather a stonemason, and the family keeps a range of pedigree bantams.

Although she now lives in Blythe Bridge, near Uttoxeter, Janine’s heart has always been in the rural sector, and this shines through in her work, from covering Young Farmers events to exploring the pros and cons of Limousin cattle. An article on the latter recently led to Janine winning Guild of Agricultural Journalists’ (GAJ) annual training award, sponsored by John Deere.

Janine, who studied sound technology at Liverpool Institute for the Performing Arts, before doing a Masters in Broadcast Journalism at Staffordshire University, said: “I am looking forward moving on and having a career, rather than just a ‘job’, which is what I have been doing throughout my university years.

“It’s quite exciting to be looking at ways in which video can take news from Harper Adams to a much wider audience. So much of the research and teaching here can be used to benefit people in agriculture and other rural industries. But it’s also important that we reach people who don’t necessarily think it has anything to do with them; all the youngsters who don’t really know where their food comes from. I think Harper Adams has a part to play in helping to educate them, and I hope I can make a contribution by making some of that information more accessible.

“It’s going to be great working with so many like-minded people and I can’t wait to get stuck into the fascinating stories Harper Adams students have to tell,” said the former Blythe Bridge High School pupil.

Prior to winning the GAJ award, Janine completed their week-long training course before undertaking a work experience placement with Guild member Ian Damms and his Northants-based video company Breeze & Freeze.

She has completed further work experience with Staffordshire Post and Times Group titles, Smith Davis Press and was a newsreader for Cross Rhythms Community Radio. Janine also worked on the university radio station in Liverpool and completed a variety of production, reporting and studio work during her training at Staffordshire University.

All Harper Adams videos will be available to view on the university college’s website and YouTube channel, but footage can and will be used for other projects. Anyone interested in using any of Janine’s footage, or who would like to request a video of forthcoming Harper events should contact the Harper Adams Press Office on 01952 815291.