RESEARCH: How salts can combat disease 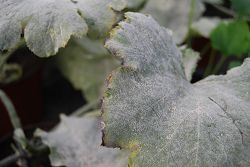 Researchers at Harper Adams University College, in conjunction with ADAS, are investigating the most effective simple salt treatments to help farmers control crop diseases such as mildew.

It is hoped that this Department for Environment, Food and Rural Affairs (Defra)-funded project will find a method of reducing the environmental and food-chain burden of synthetic products, by using the same salts that you may use in baking.

Martin Hare, crops lecturer at Harper Adams said: “One of the main problems that farmers and growers face is a reduction in yield and quality of their crops due to weeds, pests and diseases.

“Tools used to control these include pesticides, but, even though these are deemed safe if used in accordance to their conditions of approval, we are all looking for possible alternatives.

Although the researchers understand that simple salts may not replace pesticides completely, they are hoping to give farmers an alternative after evidence has shown that fungi are developing resistance to conventional methods.

Peter Kettlewell, crops lecturer and reader at Harper Adams said: “As well as being cost effective, the salts we are investigating are very safe and a lot of them are used in food preparation so we are all consuming them anyway.

“A draw-back is that they’re not as good as the chemicals available to purchase so we are hoping to find what the best salts and if we can make them better so that they are almost as good as what is on the shelves at the moment.

“Defra, granted us funds to review how salts are being used globally, and we have found that there is definitely scope to use them on certain crops, in this case, courgettes.”

Examples of plant diseases affected by the application of simple salts include blight and leaf rusts and in particular, powdery mildew- a disease commonly found on courgette plants.

Postdoctoral researcher Thomas Deliopoulos said: “We conducted a survey of the global literature on this topic and found that more than 20 inorganic salts have the potential to reduce the severity of more than 40 fungal diseases in a variety of plant species.

* Many commercial products containing these salts are now registered as biopesticides for fungal disease control by the Environmental Protection Agency in the USA. Potassium bicarbonate is approved for use as a fungicide on all horticultural crops in the UK.