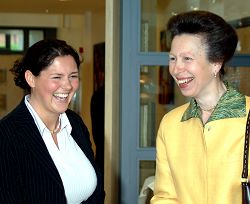 Harper Adams University College is delighted to be hosting a visit by HRH The Princess Royal in December.

The Princess is expected to tour the new dairy unit on the Harper Adams farm before being shown around the new West Midlands Regional Food Academy, which Her Royal Highness will be officially opening.

Mr Early said: “The West Midlands Regional Food Academy has been conceived and created as a common good project for the West Midlands and the country. Our intention is to support the West Midlands region’s food industry to grow and bring economic benefit to the UK. We also aim to build bridges between the food industry, schools and academia, to encourage more young people to develop careers in the industry.

“Each of us relies on the food industry every day.  In a world where uncertainty about food security will inevitably increase, we must do everything we can to protect our own food industry.  The West Midlands Regional Food Academy has an important part to play in this.”

The academy, developed within the shell of an old animal feed mill at the Newport, Shropshire, campus, will provide training, education and technical services to the food industry and will work to link schools with the industry, thus increasing understanding of the British food supply chain and its underpinning social role.

During the visit on December 1, The Princess will meet staff, students and invited food industry guests, and sit in on a debate about food security.

Newly appointed Harper Adams Principal Dr David Llewellyn said: "It is always a delight to welcome HRH The Princess Royal, as Honorary Fellow of the College, to our campus. We are very much looking forward to the visit by Her Royal Highness in December.”