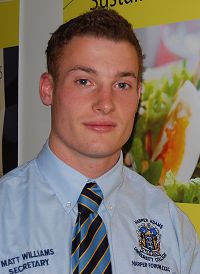 A land management student is hoping to inspire others to think again about a rural career path after scooping top grades in his first year at Harper Adams.

19-year-old Matthew Williams worked hard to gain his place on the Rural Enterprise and Land Management (REALM) course at the University College, but not after considering a future in sport first.

The second-year student said: “I didn’t think I would be where I am now because although I come from a farming family, I was encouraged to try other things and always fancied becoming a P.E teacher.

“I started to work on a farm and really enjoyed it so thought I’d look into agricultural courses and that is when I decided to enrol on an NVQ level II course in Livestock Production at Coleg Powys, Newtown. They were really supportive and even helped with my application for university.”

Whilst at Coleg Powys, Matthew spent three days a week at The DDol Farm, Llanbadarn Fynydd, for Mssrs D&H Jones, a large upland sheep and beef unit with a substantial poultry enterprise. The rest of his time was spent achieving nationally recognised qualifications in subjects such as the Safe Use and Handling of Pesticides, Sheep Dipping and a British Wool Marketing Board (BWMB) Shearing Certificate.

Once successfully completing his NVQ in 2008, Matthew was accepted on the Extended Foundation Degree Programme at Harper Adams, gaining a string of distinctions in his assessments during the first year.

Matthew said: “I chose the course because it has interesting modules and has great job prospects at the end. I worked hard and did well last year so now I’m hoping that I can become a chartered surveyor or go into auctioneering and land sales in the future.

“I’m enjoying the second year so far and have been appointed as Secretary for the Harper Forum- a student lead group that organise and run weekly lectures with important figures from land-based industries.”

He added: “I always wanted to go to university but never expected to end up at one that specialises in agriculture, but regardless, I’m pleased I made the choice and look forward to my future.”