Rural Advocate in talks at Harper 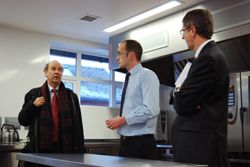 During a recent visit to the area, Rural Advocate Dr Stuart Burgess learned about developments within North-East Shropshire's rural communities.

The event, organised by the Local Rural Forum, involved presentations on transport initiatives within the district and on the process of creating the Edgmond Parish Plan.  Dr Burgess also heard about the latest work of the Women in Rural Enterprise (WiRE) programme based at the University College, and its efforts to stimulate business creation and growth in the rural economy.

Debbie Wilcox was able to provide an update on the National Care Farming Initiative before joining the group on a tour of the new West Midlands Regional Food Academy, at Harper Adams.

University College Principal Dr David Llewellyn said: "We are hopeful that after discussing the issue of university funding, Dr Burgess will be able to pursue with Ministers some of the points we raised about the need to ensure that rural and land-based subjects are given support over the next few years, not least to address the challenges presented by the new UK Food Strategy." 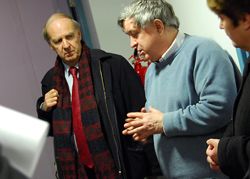