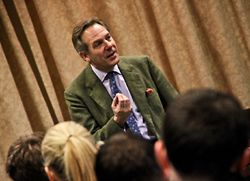 The Common Agricultural Policy (CAP), tax, forestry, sustainable power sources, rural broadband and food security were all on the agenda when William Worsley, President of the Country Land and Business Association (CLA) joined Harper Adams students for an open forum discussion this week.

Mr Worsley was keen to hear the students’ views, as the CLA is developing plans for youth/student membership. “I’ve been very keen that we should be engaging with younger people coming into the industry,” he said. “I think it’s really important that people like you, at agricultural college, are shown what the CLA is all about and why the CLA exists. It exists principally as a lobbying organisation but it also provides generic advice for members.”

Questions from the students covered a wide range of topics. On the future of power generation, Mr Worsley said that, in his personal opinion, nuclear power could not be ruled out, but that he was an advocate of small scale local generation sources – all of which land managers can become involved in. As a result, he was pleased to hear that Harper Adams plans to install its own anaerobic digestion unit during 2010, and he took the opportunity while at the University College to tour the campus and witness all of the sustainable technologies already in use, including biomass and photovoltaic power generation.

Mr Worsley spoke at length about the CAP, and when finally asked what he would wish for if the Government offered to grant him three wishes, a “sensible and appropriate solution to CAP post 2013” was his top priority, followed by improved tax systems and broadband for rural areas.