Development of galacto-oligosaccharide as a prebiotic for animal feeds

Galacto-oligosaccharide (GOS) is a food ingredient with prebiotic properties, derived from cow’s milk, it is a non-digestible carbohydrate. GOS is widely recognised to encourage the growth of beneficial bacteria. The most common use for GOS is as an ingredient in human infant formula, as it has been shown to help aid digestive health. Oligosaccharides are the third most prominent component in human breast milk after lactose and fat, hence GOS is added to infant formula to better emulate human breast milk. This project is currently investigating the potential opportunities for the use of GOS in animal feed to aid in the stabilisation of the gut microbiome, benefiting lifetime performance.

Galacto-oligosaccharides (GOS) are a recognised prebiotic for use primarily in human infant formula but increasingly, poultry and pig feeds, with interest as a replacement for in-feed antimicrobial growth promoters. It is manufactured from naturally occurring sugar (lactose) found in cow’s milk using enzymatic reactions. These use a beta-galactosidase to cleave lactose and transfer the galactose molecule to an acceptor molecule, either another lactose molecule (DP3) or a pre-formed GOS molecule to increase the polymer length. The final polymer chains vary in length from two molecules, up to eight molecules in length.

Pig research has indicated that when fed, it is these GOS polymers that act as a food source to selectively encourage the growth of beneficial micro-organisms, which naturally live in the intestines.     In particular, the promotion of Bifidobacterial and lactobacillus populations are of interest because they increase short chain fatty acid (SCFA) concentration (acetate, propionate and butyrate), which is not only a good source of nutrients for the animal but also helps to prevent proliferation of potentially harmful organisms such as E. coli. This research project is investigating the benefits of dietary GOS supplementation in a range of animal feeds to improve production performance and enhanced gut immunity, microbial communities and function; of a magnitude which may reduce the requirements for in-feed antimicrobial compounds. 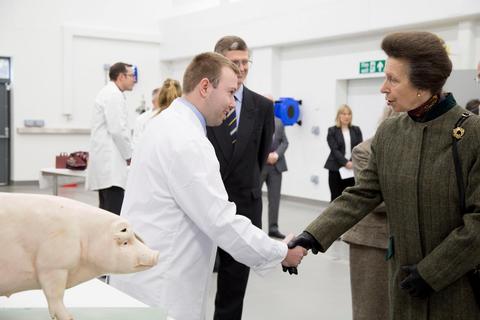