The epidemiology and integrated control of fairy rings on golf courses

Fairy ring, a fungal turf disease, is becoming increasingly problematic on golf courses, affecting both playability and aesthetics. This project aims to further understanding of the species involved, factors affecting their growth, and effective control.

A fairy ring is the advancing front of an individual fungus that is radiating outwards from a point of origin. Generally, the larger the fairy ring, the older the individual.

In turf, they manifest as a circle of dead grass (Type I), a circle of longer or darker grass where growth has been stimulated (Type II) or a circle of fungal fruiting bodies, namely mushrooms or puffballs, (Type III).

The disease is becoming increasingly prominent on golf courses, with the Open Championship courses being of particular concern. Not only are they unsightly, they can disrupt a game, making control of fairy ring growth of utmost importance for greenkeepers, course managers, and golfers alike.

Hence, this study is undertaken to thoroughly investigate the epidemiology of fairy ring, including DNA analysis to identify the causative species, before establishing trials to deduce the most effective means for controlling it; be it cultural, biological, chemical or a combination of techniques. 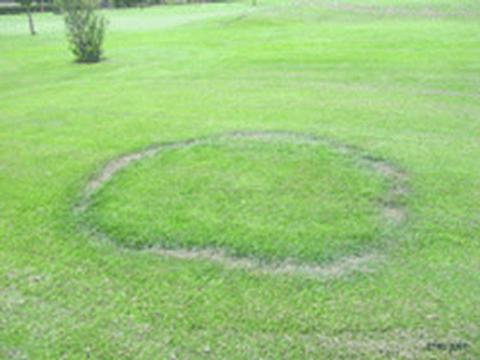