The head blight fungus Fusarium graminearum is one of the most devastating pathogens of small grain cereals such as wheat throughout the world (Guenther and Trail, 2005). This pathogen produces a subset of secondary metabolites called mycotoxins. Fusarium head blight (FHB) can also be caused by a complex of head blight pathogens where the fungal interactions result in increased productivity of mycotoxins due to competitive stress (Xu et al. 2007a; 2007b). However, molecular studies such as Sybr® ¬Green Real-Time PCR for individual detection of the species in a complex (Moradi et al. 2010) and real time quantification of mycotoxin biosynthetic genes (Marin et al. 2010) need to be carried out to investigate whether such interactions differ significantly for within-species and between-species competitions, and mycotoxin concentrations. Among mycotoxins produced by species from genus Fusarium, the most frequent and important are deoxynivalenol (DON) and zearalenone (ZON), which are known to cause yield and economic losses as well as deterioration in quality. Therefore, legislative limits have been set for DON and ZON in unprocessed cereals and their processed products. Matthaus et al. (2004) detected the higher concentrations of DON in earlier stages and lower concentration of ZON in later stages of growth and development of wheat. These findings were confirmed by Brinkmeyer et al. (2006). The concentration and distribution of DON and ZON also differed significantly between years in whole wheat kernels (Cowger and Arrellano, 2010) and in mill fractions (Edwards et al. in press). It was observed that the post-anthesis rainfall and late infection by Fusarium are the important factors leading to high DON concentration in whole wheat kernels (Cowger et al 2009; Cowger and Arrellano, 2010). The distribution of DON between mill fractions on the other hand is depending on the level of DON in whole wheat kernels. This was confirmed by Nishio et al. (2010) who found that the level of DON was approximately doubled in bran and halved in flour for the level of DON in whole wheat kernel. As compared to DON, fewer studies have been done to investigate the production and distribution of ZON in wheat. Production of ZON in living plant tissues have been known to formulate the glucose conjugates within them (Zill et al. 1989). Lysoe et al. (2008) characterized the up-regulated Expressed Sequence Tags (ESTs) during zearalenone production and reported their expression patterns in wheat and oat under different experimental conditions for the first time, in their recent study (Lysoe et al. 2009). However, the production of ZON in wheat under field conditions seems to largely depend on the weather and delayed harvesting as reported by Edwards (2010). In spite of these studies, the specific function of ZON in Fusarium spp. has not yet been identified. Based on these results, and the threats caused by the climatic factors on the severity of FHB disease and ultimately the accumulation of mycotoxins (DON and ZON) in wheat at unacceptable levels, there is a need to conduct further research into this issue by employing advanced molecular methods like real-time PCR, reverse transcriptase PCR and ELISA to know the accurate timings of mycotoxin production and their distribution patterns in wheat as a whole and its mill fractions. This will improve the ability to predict mycotoxin concentrations in harvested wheat and their distribution within mill fractions.

A selection of Fusarium isolates from Section 1 will be purified as single spore colonies and used throughout the project.   Fusarium isolates of known chemotype (mycotoxin profile) are also available from the Defra-funded winter wheat disease survey conducted by Fera.  Methods will be developed to optimise culture storage and spore production and storage for these isolates.

Spores of a selection of Fusarium isolates will be germinated and grown on autoclaved re-hydrated rice for 2 weeks at 25°C in triplicate flasks.  The rice will be freeze-dried, milled and analysed for DON and ZON concentration.

Studies will first be conducted in glasshouse experiments to determine the production of DON and ZON in wheat heads after inoculation of wheat at flowering with Fusarium isolates.  Winter wheat variety Cadenza will be grown in 12 cm pots, five plants per pot.  Five replicate pots per timing.  Heads of wheat will be sampled each week from flowering to harvest.  As it is believed that delayed wet harvests increase mycotoxin contamination of grain; timings will include one and two weeks post-harvest ripeness with and without wetting.  Heads will be assessed for fusarium head blight disease, weighed, dried, weighed again before milling.  Milled heads will be analysed for DON and ZON and DNA extracted for quantification of mycotoxin genes.

Studies will also be conducted in field experiments to determine the impact of various wet periods on the concentration of DON and ZON in wheat grain after inoculation of wheat at flowering with Fusarium graminearum.  Field experiment plots will be covered for various periods to mimic dry conditions or irrigated by sprinkler irrigation system to mimic rainfall events.  Plots will also be harvested when ripe and after various delays.  Grain samples from field plots will be milled by Campden BRI and DON and ZON content of whole wheat samples and milled fractions determined.  For mill fractions the relationship between the mycotoxin concentration within each fraction and within the original samples will be analysed by regression analysis.

Based on initial glasshouse and field experiments these experiments will be repeated with various modifications to the watering regimes to test hypotheses set.  Samples from early experiments will be stored air-dried and analysed for DNA.  This will give a measure of mycotoxin producing biomass within a sample.  In later experiments, samples will be flash frozen in liquid nitrogen and stored at -80°C to preserve RNA and analysed for gene expression.  This will give a measure of actual gene expression, i.e. the amount of mycotoxin production at that time point. 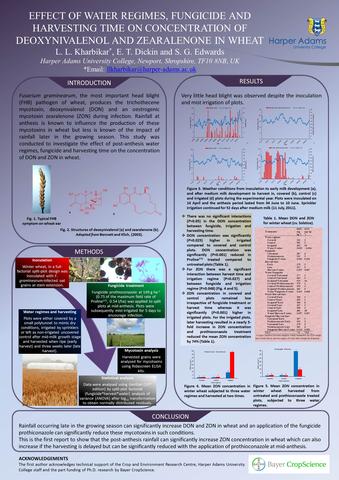