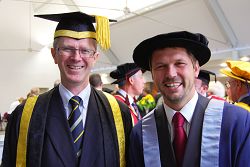 Five VIPs were honoured for their services to agriculture and given Honorary Degrees and Fellowships as part of the biggest graduation ceremony to date at Harper Adams.

More than 600 students were joined by their families, friends and VIP guests at the Shropshire-based campus last week, to celebrate their achievements and collect their graduation certificates.

Principal of Harper Adams, Dr David Llewellyn, opened the graduation ceremony which was held in a grand marquee.
This year, five VIP guests were the recipients of Honorary Degrees and Fellowships which were presented by various people affiliated with the University College.

Farmer and television presenter, Dr Jimmy Doherty of the BBC’s Jimmy’s Farm and Farming Heroes became a Fellow of the University College.

He said: “To be here at Harper Adams today is very exciting. Award ceremonies and graduation ceremonies are fantastically exciting. It’s thrilling for me to get an award, but it’s even more thrilling to see all the young people graduating today because it fills you full of excitement and admiration for all their hard work and also it makes you feel a little bit safer in the world.

“We’ve got a big job to do. Our population is growing and we have got to feed that growing population on the same amount of land we have today and the people at the forefront of that battle are going to be the farmers.

“All the farmers and the land based industries rely on this new generation coming through and seeing how enthusiastic they are it makes you think actually it’s going to be alright.”

A further Fellowship was awarded to Mr Richard Matson, equestrian expert and entrepreneur, based at Twemlows Stud Farm in North Shropshire.

Mr Matson, former Chairman of Governors at Harper Adams, said being given this wonderful recognition was “marvellous”.

He said: “The way the college has grown over the last 25 years is quite phenomenal. The lovely thing now is that because it’s grown over so many years, there are so many ex-Harper students, not just in England, but all over the world, which is really superb.”

Sir Anthony Bamford DL, after whom the Harper Adams Bamford Library is named, received an Honorary Doctorate of Science.

Sir Anthony, Chairman of JCB, was honoured for the outstanding contribution he has made to agricultural engineering, both in the UK and worldwide.

He called his Honorary Degree “a great honour”. He said: “I have been here many times and Harper Adams has been very helpful to my company JCB over the years and I like to think we’ve been a little bit helpful as well. I am lucky enough to work with quite a few of them and they are very, very good.”

A further Honorary Doctorate of Science recipient was the Agriculture and Horticulture Development Board’s Chief Scientist, Professor Ian Crute CBE, in recognition of his “leading role in crop research and associated disciplines and his role in national agriculture developments”.

Professor Crute said: “It’s a tremendous honour actually. I can’t think of anywhere in England that I would really prefer to be given an Honorary Doctorate, other than Harper Adams. I’ve always had a great association with the University College but it’s clear that Harper Adams is now the leading place for people to come and study agriculture.”

Baroness Byford was made a peer in the House of Lords in 1996 and has been on the Conservative bench and Shadow Minister for 10 of the last 13 years.

She said: “This has been my third time at Harper Adams. It’s a great joy but the changes are remarkable over the years.

“What a wonderful University College to be at. The facilities and opportunities are very vast as well as the courses here going from the creation of food to the food products at the end of the day and combined with engineering and the importance at the end of day of the earth’s natural resources.

“It’s an enormous honour and I can’t believe I’m here.” 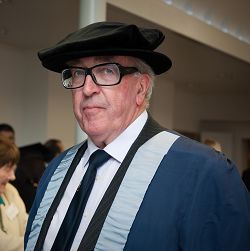 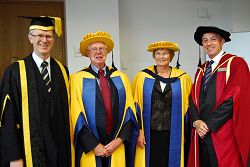 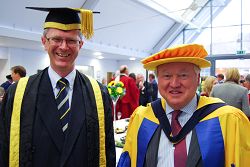