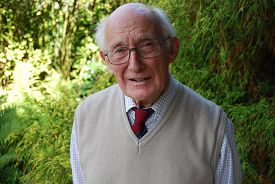 A record temperature recorded at Harper Adams University College 18 years ago has made another television appearance in a programme dedicated to extreme weather.

The BBC’s ‘Wild Weather’ was broadcast last week and explored unusual meteorological events that had occurred in the Midlands throughout history.

This included England’s lowest ever temperature, -26.1 degrees Celsius, which was recorded by Mr Bill Burrell at the University College campus on January 10, 1982. This made the Guiness Book of World Records.

Mr Burrell worked at the National Institute of Agricultural Botany’s (NIAB) Edgmond site for 33 years and one of his jobs was to take care of the weather station at Harper Adams, also located in Edgmond near Newport.

“I knew it was cold that day, but it came as quite a shock when I saw it was -26.1 degrees Celsius, I had frost on my eyelashes!”

The cold snap in 1982 produced one of the most severe snowstorms on record, with England, Wales and Ireland regularly reaching between -2 and -4 degrees Celsius. But, it was Harper Adams that felt the extent of the wintery conditions.

Mr Burrell added: “We quite regularly see cold temperatures here in Edgmond because of our location – it’s rural and quite exposed but Harper Adams is in a frost hollow. This is where the coldest air sinks.

“It was nice to be featured in the programme and to see some of the archive footage that they had found from back then.”

Crops lecturer, Professor Peter Kettlewell, recalls speaking to Mr Burrell on the day that he recorded the temperature. Professor Kettlewell said: “Because it was so cold, the moisture particles froze in the air and caused rainbows as the sun shone through. I’ve never known this happen before or since.

“Damage to the crops wasn’t that bad because the snow provided insulation on the ground so although it was incredibly cold, damage was limited.”