Harriet blogs her way to role at Farmers Weekly 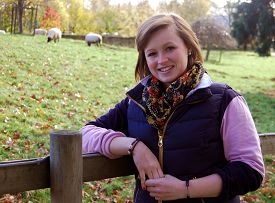 First year Harper Adams student, Harriet Wilson, has wowed judges with her journalistic skills and been chosen to write a monthly blog for Farmers Weekly.

19-year-old Harriet, from Haughton in Stafford, competed against students from a variety of different institutions across the UK to write for the ‘College Calendar’ column.

This series charts the highs and lows of student life for two keen writers, the other being Michael Neaverson of the University of Nottingham.

Harriet’s premier blog, which details her first week spent at the University College as a fresher, was published in Farmers Weekly and online at fwi.co.uk. She follows in the footsteps of last year’s Harper columnist, Steve Mears.

Harriet, who is studying a BSc in Agri-Food Marketing with Business Studies, said: “It was my Father who first pointed out the advertisement in Farmers Weekly, but when it came to gathering in this year's hay that was soon forgotten.

“I ended up writing a comical entry about being a farmer’s daughter and sent it in on the closing day. So it was a huge surprise when I received an email to say that I had been shortlisted.

“I’m delighted to be writing for the magazine, it’s an honour, and I hope that I can represent Harper Adams to my fullest potential."

Here is part of Harriet’s winning entry – “When some people think of farming they imagine huge estates with acres to spare and a grand farm house, together with an AGA, a sheep dog and a father who squeezes "OO-AH" into almost every sentence. But farms come in all different shapes and sizes. In fact so do the farmers.

The industry definitely has its thrills and spills. It offers a healthier lifestyle, heaps of knowledge and lots of laughter. We're the poorest-paid industry for what we do, but there is no other job like it. Whether my sister and I will carry on our parents' legacy I cannot say, but if we do, I can be sure of two things: we would never be billionaires and I would never be a successful hand model.”