OBE Honour for Chairman of Governors

Mrs Blackburn has presided, as Vice Chairman and Chairman, over an extremely successful period for Harper Adams, during which time her interest in and work on effective higher education governance has contributed to a number of achievements." 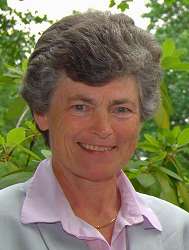 Mrs Alison Blackburn, Chairman of the Board of Governors of Harper Adams University College, was awarded the OBE for voluntary services to land-based higher education in the Queen’s Birthday Honours announced on 11 June 2011.

Mrs Blackburn has been Chairman of the Board of Governors at Harper Adams since November 2007.  She joined the Board in December 1997 and was Vice Chairman from 2003 to 2007, during which time she served as Chairman of the University College's Finance and General Purposes Committee.

Mrs Blackburn has previously served on the GuildHE Governance Network Co-ordinating Committee and the Leadership, Governance and Management Strategic Advisory Committee of the Higher Education Funding Council for England.  Mrs Blackburn’s career in the Civil Service saw her work in the Ministry of Agriculture, Fisheries and Food where she was involved in the common agricultural and fisheries policies, agricultural and fisheries research, marketing, agricultural education and better regulation.  She also worked for two years in the Cabinet Office on European issues.

Harper Adams Principal Dr David Llewellyn said: “Mrs Blackburn has presided, as Vice Chairman and Chairman, over an extremely successful period for Harper Adams, during which time her interest in and work on effective higher education governance has contributed to a number of achievements, including the granting of Research Degree Awarding Powers in 2006, consistently high performance (amongst the top ten UK HE institutions) in national assessments of student satisfaction and student employment and very strong links with the agri-food industry.”

Harper Adams University College visitors, students and staff will soon be able to get a range of services in the palm of their hand, when mobile app campusM is launched for users of the Shropshire campus. Posted 17 June 2011

Harper Adams University College is pleased to announce that it has retained its Fairtrade status for another year. Posted 16 June 2011

Harper Adams University College, in conjunction with the British Ecological Society is today hosting a conference to discuss ways in which invasive species can be managed to secure future food supplies and increase profit for farmers. Posted 16 June 2011