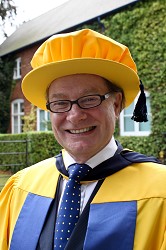 At graduation 2011, Harper Adams University College presented three honorary degree and three fellowships to individuals deemed to have made, in their own fields, "outstanding contributions to innovation, developing greater understanding between all aspects of the agri-food chain and the need to develop the public understanding agri-food and rural issues that reflect our mission as a higher education institution and some of the activities in which we have been engaged over the last year".

The recipents are detailed below:

Graduating from the University of Bath with a degree in Business Administration, Mr King spent much of his early career with Mars Confectionery and Pepsi International.  He then held a number of senior positions at ASDA/WalMart and Häagen Dazs UK and was appointed Director of Food at Marks and Spencer Group plc.

Under his leadership,Sainsbury’s agriculture team have done much to support farmers, including establishing a series of industry leading Development Groups designed to help farmers and suppliers produce more sustainably, drive innovation and efficiency and raise animal welfare standards. Since 2006 the company has invested more than £30 million in developing these relationships and in January 2010 it pledged a further £40m over three years.

Mr King is a member of the CBI President's Committee, a patron of Skillsmart Retail, the national sector skills council for retail, and is a Visiting Fellow of Oxford University's Centre for Corporate Reputation.

Mr King was awarded the CBE for services to the Retail Industry in the Queen’s Birthday Honours List 2011.

Justin King said: “It’s a huge honour to receive this recognition from such a prestigious institution. Sainsbury’s has supported British farming for over 140 years and we continue to push the boundaries in sustainable sourcing and farming.

“Working with the agriculture industry and sourcing with integrity to provide customers with quality products at fair prices, is part of Sainsbury’s DNA and core to our values. Over the years, we’ve built strong partnerships with our farmers through our dedicated Development Groups, working together to reduce our impact on the environment, increase efficiency, improve yields and raise animal welfare.

“I’m very proud of what Sainsbury’s has accomplished as a business and I look forward to working with the UK agriculture and farming sector for many years to come.”

After completing his education in New Zealand, Dr Davies served as a navigation officer in the Navy.  In 1985 he became Chairman and Managing Director of Dabro International Ltd and following this he became Managing Director of Alamo Group Europe and Vice President Alamo Inc (USA).  He has also held a significant number of Directorships in France as well as in Asia, Canada and Australia. Alamo Group Europe Ltd (AGE) is now one of the world’s most profitable agricultural engineering groups winning numerous national and international industry awards, including the Queen’s Awards for Innovation.

Dr Davies has served on a wide range of important industry bodies both locally and nationally including: President of the Agricultural Engineers Association, Business Ambassador for Shropshire County Council; West Midlands Business Forum; Shropshire representative on the All Party Parliamentary Export Group in the House of Lords and as a member of the All Party Parliamentary Group on Engineering and Information in the House of Commons.  He is currently Chair of the Marches Local Enterprise Partnership.

Dr Davies has been an enthusiastic supporter of agricultural engineering at Harper Adams for many years, annually providing a range of student scholarships and placements and lending unstinting support to the development of the Department wherever he can.

Dr Davies said: “I have a long association with Harper Adams, going back to  1985, and so I am very, very honoured to receive this award from such a prestigious seat of learning.”

To the new graduates, he said: “Be very  confident in what you do. From a commercial point of view, one can make a very successful career in manufacturing in this country and you can still make money at it!”

Matt Dempsey is Editor and Chief Executive of the Irish Farmers Journal. The Journal has seen a major growth in its circulation under his editorship and now realises well over 70,000 copies per week.  Mr Dempsey is also well known for his knowledge of global agriculture and is a member of the Irish Commission on Bioethics.

Mr Demsey is also Chief Executive of the Agricultural Trust, publishers of the Journal and the Irish Field, and a former President of the European Agricultural Publishers Association and the Irish Grassland Association.  He is Chairman of the Board of the RDS and a past Chair of the National Agricultural Research Institute and ACOT, the national advisory and education body before their amalgamation into Teagasc.

A graduate in Agricultural Science from UCD, alongside his busy career in journalism, Mr Dempsey also runs an intensive tillage and beef farm in Co Kildare. In 2010, he was awarded an Honorary Degree of Doctor of Science from University College Dublin and in the following year he was asked to give a key note speech at the Oxford Farming Conference.

Matthew said: “There was always an Irish connection with Harper Adams, and at the Irish Farmers’ Journal, we have hired some excellent graduates from the University College, including Justin McCarty, our Head of Livestock, who has brought a new dynamism to our coverage in that area. And we have very close links with industry as well.

“I could not believe it when I was told I would be receiving this honour. I am just really, really delighted, for the Farmers’ Journal and everything else which I represent as well as myself.”

Following his education at Oundle School, Tony decided to follow a career in accountancy.  He worked for Deloitte Plender Griffiths, initially in London and later at the firm’s practice in Salisbury, Zimbabwe (then Rhodesia).  During this time he travelled and worked extensively across South Africa.

Following the Rhodesian declaration of unilateral independence, he returned to the UK and joined his family’s well known firm of farm equipment distributors, FH Burgess Ltd, retiring as Managing Director after 30 years’ service.  Throughout his career in accountancy, Tony has also maintained a direct interest in farming through managing his own farm at Ellerton.

In 1978 Tony joined the Board of Governors at Harper Adams and served on a wide range of Committees, including chairing the Audit Committee and later the Finance and General Purposes Committee. He retired from the Board in 2004 after 25 years of unstinting commitment.

Since 2004, Tony has continued his work for the University College by taking up a new challenge in the form of chairing the Harper Adams University College Development Trust. Under Tony’s dedicated and professional leadership, the Development Trust has grown and flourished.  It now provides over 80 scholarships for students and has played a key role in securing major donations for capital projects from a wide range of industry and individual donors.

Tony said: “I am absolutely thrilled to receive the Harper Adams Fellowship. I never went to university, because I am sufficiently old that military service was still about when I was a teenager, so this is a great pleasure. The graduating students should know that the world is their oyster, if they work hard to go and out make it.”

Peter Bloxham joined the staff of Harper Adams in 1986 as Principal Lecturer in Agricultural Engineering, subsequently becoming Head of Engineering, before taking early retirement from the University College in August 1999. It was during his time at the University College that Peter visited China regularly to further his work on biogas and pollution control.  He grew to love China and decided to live and work in China following his retirement from Harper Adams.

Based in Beijing, Peter is Harper Adams’s representative in China, developing important links both with Chinese government departments, UK overseas trade bodies and associations, the British Council and NGOs operating in China. Our successful partnership with both Beijing Agricultural College and China Agricultural University flourished under his guidance.  Peter is also committed to ensuring we keep in touch with our Chinese alumni.

More recently, Peter has developed further links with major Chinese Universities and he has also put in place a strong link with the Ministry of Agriculture in Beijing which has led to Harper Adams has being asked to deliver  annual training courses to Chinese Ministry officials for the past 4 years. As Deputy Chairman of the British Beijing Chamber of Commerce, Peter has also been able to put the Harper Adams view to visiting British Ministers of State including those from BIS responsible both Trade and for Education.

Equal to his passion and commitment to Stoke City football club, Peter is through and through a Harper Adams man, still working tirelessly to support the University College in further strengthening is reputation and links in China.

Ladies and Gentlemen its gives me great pleasure to present to you Mr Peter Bloxham for the award of the Fellowship of the University College.

Peter said: “To receive the Fellowship is a great honour – and it came as a big surprise! Harper Adams is a place that gives you tremendous opportunities, it transformed my life. Food is a big, global industry, to it’s a very good business to be in. The opportunities in this area are really good and I think Harper Adams provides the right environment to get involved.” 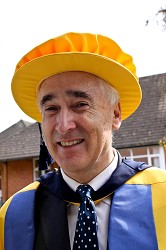 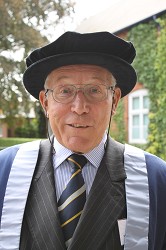 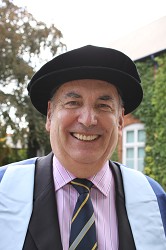 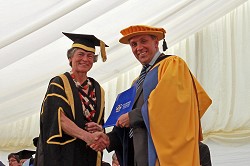