End of a fantastic year for Harper Adams

We’re extremely proud of what students and staff have achieved.” 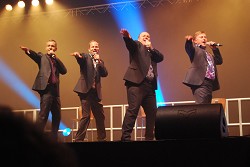 Shropshire’s only higher education institution, Harper Adams University College, has enjoyed a highly successful year and is looking forward to even greater prosperity in 2012.

“We’ve had everything from charity wig day run by our students, to our Estates Manager being named ‘Energy Manager of the Year’ in a national award scheme. We’re extremely proud of what students and staff have achieved.”

In spring 2011, around £120,000 was awarded to students at the Harper Adams Development Trust scholarship presentation event. This was in the form of 70 awards from a host of companies, including the Newport and District Agricultural Society.

The heart of the campus received a major enhancement in the shape of a new £4.5million student services building, The Faccenda Centre. Robin Faccenda, former student, owner of one of the largest poultry processing companies in the UK and whom the building is named after, gave generous funding towards the project.

Farmers from across England travelled to Harper Adams in April for a series of talks and demonstrations at the LEAF (Linking Environment and Farming) Technical Field Day. The event was organised to help them to turn a profit, while minimising negative impacts on the environment.

May was an extremely busy month on campus, particularly for the students. Comedy in the Country, organised by the Students’ Union, welcomed around two thousand visitors to Harper Adams to enjoy the likes of Jimmy Carr, Rufus Hound and Jack Whitehall.

A group of students also biked to the Young Farmers AGM in Blackpool, raising £2,000 for the Anthony Nolan, Macmillan, Leukaemia and Lymphoma Research and Teenage Cancer Trust charities.

During the summer, the University College was pleased to welcome 350 teenagers from across the UK to sample a three-day residential taster course. Higher Education Choices (HEC), was opened by television presenter and farmer, Adam Henson.

September saw Harper Adams named University College of the Year in the Sunday Times University Guide. Dr Llewellyn said: “We were 6th in the UK for teaching excellence, joint 7th for graduate employment, joint 6th for student satisfaction and entered the top 50 universities in the league table of 122 institutions. This is a reflection of the hard work of our students and staff.”

Reflecting on the Times Higher Education award, Dr David Llewellyn, said: “Harper Adams is firmly committed to developing and sharing knowledge of renewable technologies and how they can be used to the wider benefit of the agri-food sector."

2011 was rounded up with the launch of a new scholarship in conjunction with global food & agribusiness bank, Rabobank, and the Royal Agricultural Society for England.

Successful applicants will receive £9,000 for each of the three years spent studying at the University College, as well as a work placement opportunity offered by an industry partner.

Dr Llewellyn said: “As you can see, we have had an extremely successful year at Harper Adams and can only hope that this will continue in 2012.

“We are already busy organising events for the new year, starting off with the official opening of the Anaerobic Digestion plant in January.”

Visit the Harper Adams website: www.harper-adams.ac.uk to learn more about the year’s successes. 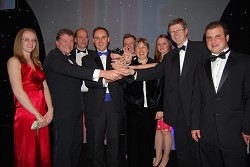 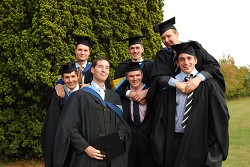