As for being here, I wouldn’t change a thing. 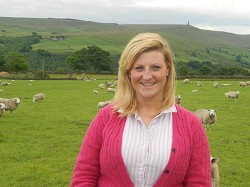 Harper Adams agriculture student, Hannah Noble, has secured a graduate job in dairy genetics thanks to her placement year working at Genus Breeding.

The final-year student from Hebden Bridge, Yorkshire, comes from a family beef and sheep farm and has been waiting for the opportunity to be involved with the dairy industry.

The 22-year-old, said: “As my family farm beef and sheep, I don’t have the same amount of dairy experience that other young people in agriculture might have.

“Without being able to work at Genus for my placement year, I don’t think I’d have had a look in.

“Tasks that I did included administration and office work, taking international visitors on farm tours, liaising with bull studs, and representing the company at shows and events.”

Hannah will be starting her job as “Breeding Programme Assistant” once she has completed her final exams in the summer.

Aside from her studies at the University College in Shropshire, Hannah is the Secretary of Calderdale Young Farmers, participating regularly in tug of war competitions and stock-judging. She also helps out on the family farm, taking care of the sheep and in particular, lambing.

She added: “I didn’t really know any young farmers before I joined the club, so it introduced me to the lifestyle and the possibility of making agriculture a career.

“I really enjoy tug of war, there’s a lot of technique involved that people perhaps don’t realise. It also encourages teamwork and gives a sense of involvement.”

Hannah first heard about Harper Adams through being involved with young farmers, and found that a lot of people recommended the courses and quality teaching.

She said: “People had said to me that Harper Adams gives the best grounding for a career and I guess I now have proof of that.

“As for being here, I wouldn’t change a thing. I’ve met so many like-minded yet diverse people and when you’re away from Harper Adams, people always know someone that’s been here.

“I hope that in the future I’ll stay working in dairy genetics and sales, but eventually return home to run the family farm.”