We have been very lucky to have Hu Lian at the university. He is a very talented young man. He has done remarkably well in six months to have achieved what he has done. 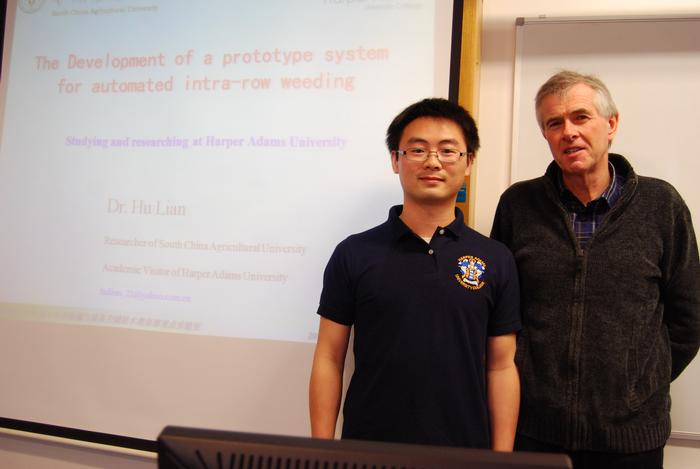 Dr Hu Lian is due to return to China tomorrow where he plans to continue developing and testing robotic systems for identifying and eliminating weeds.

Currently, farmers usually deal with weeds by either spraying entire fields or by using farm workers to physically remove weeds by hand.

Researchers like Dr Hu hope that the development of agricultural robots will ultimately lead to the reduction in the amount of chemicals used, address the lack of labour in some parts of the world, be more cost effective, increase safety, and reduce the amount of energy used.

During his last day with the Engineering department at Harper Adams, Dr Hu, who spoke no English when he arrived on campus, gave a presentation of his work to lecturers, colleagues and friends.

The 28-year-old, who is an electronics engineer and has spent 10 years training in his specialist field, said: “It was very good being here – everybody has been very friendly.

“I would like to write two English papers about what I have done and do more detailed tests in the field.”

David Giles, Senior Lecturer in Engineering at Harper Adams, said: “In many parts of the world labour is becoming scarcer in the countryside and because labour is not available crops are failing.

“There is quite a pressing need to help develop the technology to replace labour as labour is not there to grow the food.

“It’s a question of food security and such is the pressure to develop robotic systems to help grow food. It’s a very important message.”

He added: “We have been very lucky to have Hu Lian at the university. He is a very talented young man. He has done remarkably well in six months to have achieved what he has done.

“He was learning English for the first two months he was here and it is impressive how much he has come on.

“It’s the first time we have had a research scientist from China here. This will help us develop stronger links with universities in China. We are hoping to encourage more people to come here from Beijing and South China universities and maybe some of our staff will travel over there.”