There were two reasons I wanted to come to Harper Adams. Firstly, to improve my English and to learn about English culture, and secondly, because Harper Adams is investing in the area of field robotics. 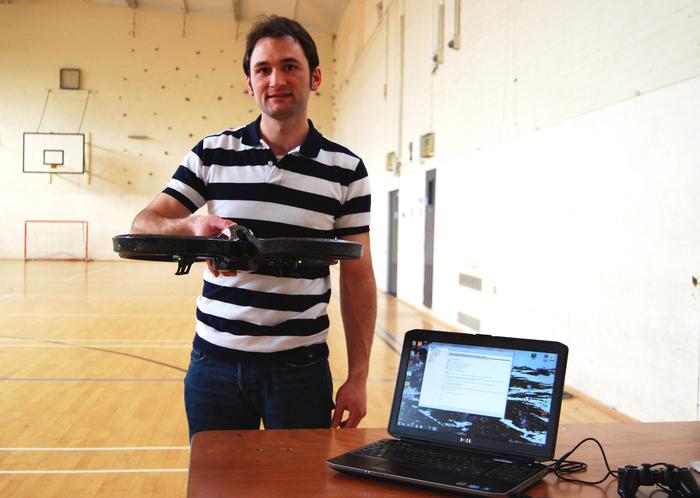 A French postgraduate student has completed seven months research at Harper Adams University developing an unmanned aircraft for use in agriculture.

Marc-Alexandre Favier, from Bourg-en-Bresse, in eastern France, came to Harper Adams as part of his Masters in Mechatronic Systems – Engineering from the University of Osnabruck in Germany.

He will return to Germany on May 1 where he will give a presentation in Berlin on the research he has carried out during his time at Harper Adams.

The 27-year-old designed a prototype Unmanned Air System (UAS) to be used as an eye in the sky for farmers who often have to manage and monitor livestock on very large and remote estates.

He used an AR Drone 2 with a camera attached to the bottom to allow the user to get a bird’s eye view and came up with a computer program which instructs the drone to locate, recognise and track livestock.

Although the drone can be controlled via WiFi on a computer, the aim is for farmers to be able to control it using an iPhone or smartphone.

Marc-Alexandre said: “The number of robots for professional use is increasing significantly so it is very important for Masters students to be up-to-date with robotics – it’s the future and the present.”

He said his prototype was designed with Scottish sheep farmers in mind, many of whom spend large amounts of time and cover many miles monitoring their livestock.

“The idea is to combine using a quad bike with an unmanned aerial vehicle to help the shepherd not to have to spend too much time managing his flock,” he added.

“I have therefore developed a functional prototype drone to recognise and track sheep.”

Marc-Alexandre, who hopes to work in the area of field robotics once he completes his Masters, said he had thoroughly enjoyed his time at Harper Adams.

“I want to thank Harper Adams and the people who work here,” he added.

“There were two reasons I wanted to come to Harper Adams. Firstly, to improve my English and to learn about English culture, and secondly, because Harper Adams is investing in the area of field robotics.

“I have had a very nice time here because you are living around nature but at the same time it is like living in a city because there is a lot of activity at Harper Adams and in the surrounding area.

“Harper Adams has also opened my eyes to Asia because I have worked with fellow researchers from China. This has been a very good experience and I have learnt about Chinese culture and gained extra knowledge from them.”