Graduate and friend to the stars joins Shropshire chartered surveyors

I was keen to get a broad range of experience and I’m certainly getting that at Madeleys. 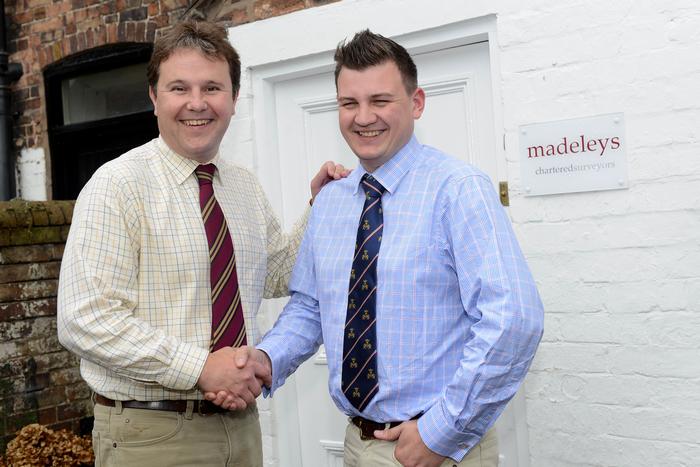 A 27-year-old former gamekeeper who is used to working alongside royalty and Hollywood stars like Robert Downey Jr has joined a Shropshire company to help the county’s rural businesses thrive.

Chris Powell beat off strong competition to land a graduate position at Madeleys Chartered Surveyors in Much Wenlock after graduating from Harper Adams University this year.

Chris, of Hope, near Minsterley, is from a farming family and spent four years as a gamekeeper in Dorset, where he counted Princes William and Harry, Jools Holland, Ian Botham and Eric Clapton among his regular shooting clients, before moving to Shropshire.

But he has left the glitz and glamour of celebrity shoots behind to concentrate on a career in giving advice and support to farmers and rural businesses in Shropshire.

Chris spent four years studying a BSc (Hons) Rural Enterprise and Land Management degree at Harper Adams, and said he was pleased to have started at Madeleys Chartered Surveyors.

“I was keen to get a broad range of experience and I’m certainly getting that at Madeleys,”he said.

“I joined the team at the start of September and I’ve already been involved in land sale negotiations, helping farmers to get fair compensation claims and advising on waste exemption registrations.

“I have also been working on our clients’ higher level stewardship schemes, so I’ve been out and about checking hedge and fence work and that kind of thing. I’ve been thrown in at the deep end but everyone at Madeleys has been really welcoming and I’m enjoying it.”

Chris said he was discovering more about Shropshire as he travelled around the county meeting clients.

He added: “During my time at Harper Adams I didn’t get much further than Newport to be honest, but I’m realising there is more to Shropshire than you first think.

“I’ve only just discovered the Shropshire Hills, for instance, so I’ll be spending plenty of time exploring them – when I’m not hard at work with Paul and the team at Madeleys of course.”

Paul Madeley, director and founder of Madeleys Chartered Surveyors, said: “It’s pleasing that we have been able to expand and create this graduate position, and Chris has really hit the ground running.

“He is already proving to be a valuable member of the team and has been doing some great work to help farmers negotiate their way through the reams of red tape there seems to be nowadays.

“We pride ourselves on being friendly and approachable, but also very knowledgeable and helpful, and Chris has fitted in perfectly.”