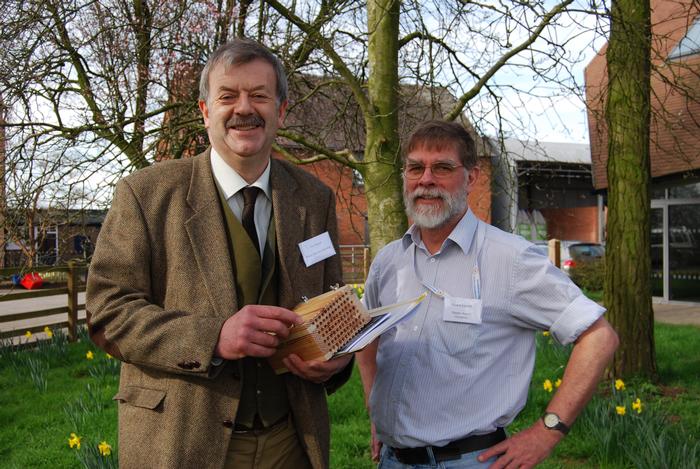 A new charity which strives to promote the importance of bees brought together researchers from across the county to welcome Harper Adams University to a vital pollinator research programme.

Praise Bee works alongside the Church of England and other denominations to champion the work and increase populations of the native mason bee.

Mason bees, Osmia bicornis, are non-stinging and do not produce honey, yet pollinate plants more quickly than any other species of bee.

A research programme has recently been devised in Shropshire to provide conclusive data ahead of a campaign to progressively increase the population of mason bees. This programme was discussed at a meeting held on campus with delegates representing a variety of organisations, including Shropshire Wildlife Trust, Pershore College, RAF Shawbury and Natural England.

Former Harper Adams student and Trustee of Praise Bee, Viv Marsh, said: “In 2013, the Praise Bee team released around 500 bees across the Shrewsbury borough after nearly 10 years of research.

“The research programme is running alongside the current DEFRA UK bee study and we are now being joined by four post-graduate students from Harper Adams University and Bristol University.

“This year we are setting up research sites at Harper Adams, as well as Pershore College and Walford and North Shropshire College, overseen by Professor Simon Leather and Bristol University’s Jane Memmott.

“The meeting has given us a chance to bring together a professional research group ahead of the programme, pool our knowledge and officially welcome Harper Adams on board.”

The ultimate aim of the charity is to use churchyards and private gardens to increase the population of mason bees and establish a natural, sustainable level.

Professor of Entomology at Harper Adams, Professor Simon Leather, said: “Research has shown that most pollination is not done by honey bees, but is instead delivered by other species of bee such as the mason bee and solitary bees, as well as moths, flies and other insects.

“As the UK’s only provider of postgraduate courses in entomology and related areas, and Shropshire’s first university, we are delighted to be involved in the Praise Bee research programme and look forward to contributing our expertise.”

In the future, Praise Bee hopes to increase bees on all UK farms and MOD sites. To contact Praise Bee, e-mail viv.marsh@postalplants.co.uk.