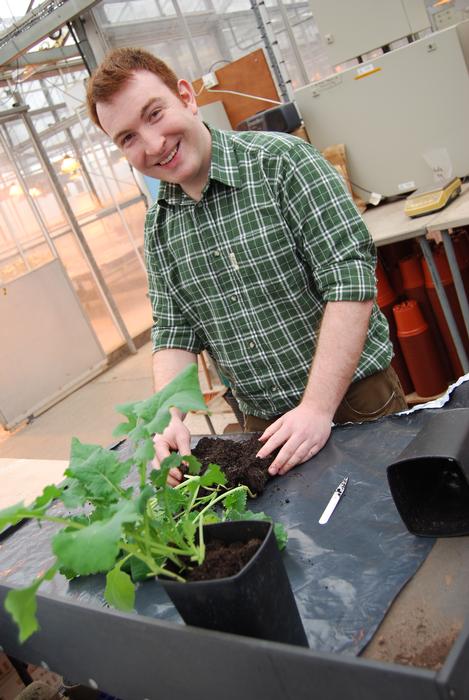 A group of plant pathologists at Harper Adams University are hoping to identify the importance of pathogens commonly found in oilseed rape (OSR) fields, and their role in yield loss.

The investigation, led by postgraduate researcher, Alex McCormack, will assess the distribution of six soil-borne pathogens and one type of nematode, and identify their contribution to the decline in crop yields.

23-year-old Alex from North Yorkshire, said: “Despite recent advances in crop breeding and management to combat the effects of tight crop rotations, OSR yields have failed to rise.

“One reason for this is thought to be the build-up of pathogens such as fungi and nematodes which cause crop losses.

“Our research has two sections – one is a nationwide survey to assess the distribution of the pathogens, using molecular techniques to screen root samples provided by growers and industrial partners.

“The second part of the work is to take the pathogens most commonly found within the samples, and examine them in glasshouse and field conditions.

“This is to identify their contribution to yield decline both individually and also when combined, as when together, they form synergetic disease complexes which may significantly increase their impact on the crop.”

Recently, Alex has been performing Quantitative Real-Time Polymerase Chain Reaction (qPCR) tests on the samples, as well as conducting glasshouse research to investigate inoculum dose responses. This glasshouse work is being undertaken to identify the optimum level of inoculant that causes disease without killing the plant, for use in further experiments investigating disease complexes.

Previous crop samples were supplied by industrial partners from major arable areas of the UK, under a separate Technology Strategy Board (TSB) supported project at Harper Adams, during the 2011-2012 growing season.

Alex, who completed a BSc (Hons) Agriculture and Crop Management degree at Harper Adams last year, added: “Using these methods it is hoped that it will be possible to facilitate management plans for the pathogens – particularly the complexes that are formed between nematodes and fungi.

“This will then allow growers to begin to manage these infections in the field environment, thus reinstating OSR yields to where they should be.”

Alex is working alongside members of the plant pathology team at Harper Adams, including Deputy Vice-Chancellor, Professor Peter Mills, Professor of Plant Pathology, Professor Simon Edwards, and is supervised by Dr Matthew Back who has previous experience with nematode-fungus disease complexes.