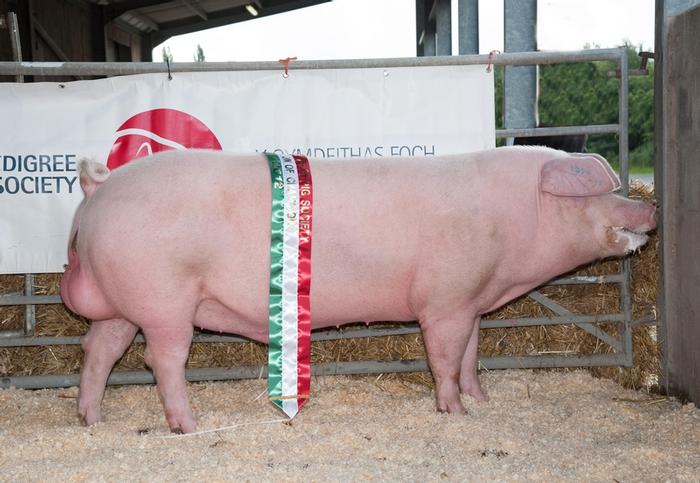 The research on behalf of the Pedigree Welsh Pig Society (PWPS) is supported by the Welsh Government under its Supply Chain Efficiency Scheme.

A feeding trial has been established to compare the growth rate of the Pedigree Welsh Pig with both hybrid pigs and the Gloucester Old Spot breed. This work is being facilitated by a team from Harper Adams, led by Pig Unit Manager, Richard Hooper.

PWPS Secretary, Pat Stebbings, said: “We have been committed to increasing the numbers of Pedigree Welsh Pigs for the past five years, conducting various research studies with the aim of producing evidence to prove that the breed can be used on a commercial basis.

“The breed was originally one of the three major breeds on which the modern pig industry was built, but due to hybrid pig production, numbers of the Welsh Pig have declined and the breed is on the Rare Breed Survival Trust (RBST) list and was described as ‘at risk’  in 2005.

“We believe that the breed is extremely adaptable and produces a superior, lean carcase that appeals to butchers. We now hope to increase the breeding stock but to do this, we need to raise awareness of the benefits, supported with performance data so that we can increase demand for this superior product.

“The research conducted by Harper Adams University will provide the information needed for those thinking of keeping the breed, to calculate margins and compare the performance characteristics against commercial breeds. Pedigree Welsh pork products already have access to premium markets.”

Harper Adams Pig Unit Manager, Richard Hooper, said: “Here at Harper Adams, we are committed to conducting research to support the future of the pig industry.

“We are delighted to be able to assist the Society in its aim to increase numbers of this lesser known and endangered breed.”

The breed is supported by the Slow Food Movement, being listed on the ‘Forgotten Food Products’ directory and was showcased at this year’s Welsh Winter Fair during live cookery demonstrations.