The standard of living for Germany is the same level as the United States and they use only half of the energy that the Americans do." 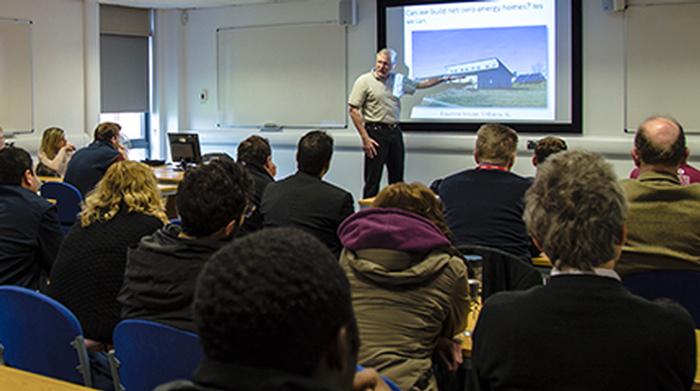 The challenge of feeding the world’s nine billion-strong population in the year 2050 and beyond was the topic addressed by Dr Tony Grift, associate professor at the University of Illinois, when he gave a guest lecture at Harper Adams University yesterday.

Dr Grift, originally from the Netherlands, was a guest editor of two special editions of ASABE Resource magazine “Feed the World in 2050”, in which 50 experts, including Harper Adams’ professors Simon Blackmore and Richard Godwin, gave their views and stories on how they believed the world could feed the UN’s predicted nine billion global population of 2050.

In his presentation to staff and students at Harper Adams, Dr Grift said it would be “the grandest challenge of all time”. Through personal experience, and some of the stories submitted to Resource, he raised awareness of the variety of challenges to be faced, and gave an overview of some solutions, but also their restrictions.

Dr Grift said: “You have to think about putting things into perspective. Take the Three Gorges Dam in China as an example. It produces so much energy and is viewed as an engineering success, yet it displaced 1.3 million people and flooded archaeological sites.”

One of the key restrictions he highlighted was the unwillingness of the human race to adopt change in order to give a better life to future generations. He said: “We don’t always do things for the greater good. I have a large motorcycle, which my wife thinks makes me look great.

“But I don’t need a motorcycle that big; it’s not good for the environment. I don’t drive it for the right reasons, I drive it for emotional reasons.

“The standard of living for Germany is the same level as the United States and they use only half of the energy that the Americans do. We don’t all need to go and put hot tubs in our gardens and waste energy like there’s no tomorrow.”

Talking directly to the students, Dr Grift said: “I think our generation owes it to you guys to give you the same standard of living that we had.

“I recommend you find a job in alternative energy, be that windmills, solar, biomass, whatever it is. That’s really where the future is going to be and that’s where we need to focus our energies because if we don’t get rid of fossil fuels at some point temperatures will keep going up.

“However, it will be a slow process… it’s going to take a while to change, like a ship turning.”

Click the links below to read the special editions of Resource magazine.