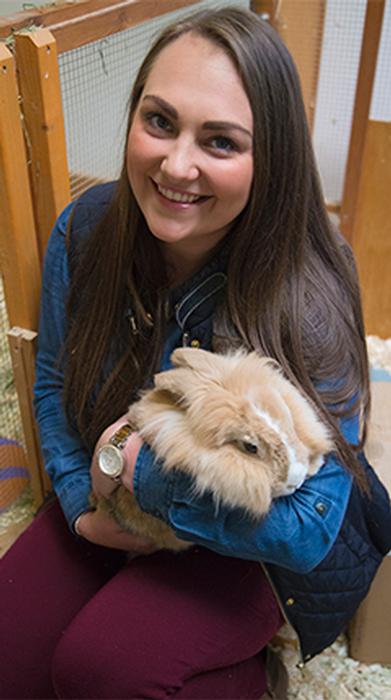 A study at Harper Adams University shows that a key stress indicator in rabbits is almost halved if enrichment activities are present in their environment; even if it just a box or tunnel.

Amy Johnson is a BSc Bioveterinary Science student. For her honours research project she decided to look at how different types of environmental enrichment, and no enrichment at all, effected rabbits’ stress levels.

“The four enrichment activities which I used were: a tunnel, balls, a box with soil inside which let them dig around, and the creation of different levels by putting in boxes.

“The most effective was the tunnel, which allowed the rabbits to hide inside, but there was only a very slight difference compared to the other activities.

“Similar studies have been conducted before, but in laboratories or farming conditions. At Harper Adams, the rabbits are kept in large runs allowing plenty of exercise, and they live in pairs.

“The study started with all eight rabbits having none of the optional enrichments for five days, so I could see what the ‘control level’ of cortisol was. Cortisol is a hormone naturally released when an animal is stressed. It suppresses the body’s immune system, so if an animal is more stressed, it is more likely to become ill.

“I then put an enrichment activity in with each pair of rabbits for five days. This would then be taken out for the weekend so that the cortisol levels were able to return to the control, before the next activity was introduced.

“I decided to use faeces to monitor the cortisol levels, instead of blood, because it is less invasive. The rabbits are used to being cleaned out by people, so it did not add any extra stress.

“When an enrichment activity was present in the rabbits’ environment, their cortisol levels dropped by almost half.

“I was not able to do a behavioural study at the same time as this research. It is something I would like to look at if I was doing this study again. I would imagine the animals would be showing more natural and less nervous behaviour which would reduce the chances of rabbits becoming aggressive to their owners.

“I did my work placement year at Chester Zoo where I saw that enrichment was incredibly important for the animals. My ambition is to be able to work in a zoo after I’ve graduated.”

‘Making My Mark’ is a collection of dissertations being completed by Harper Adams final year undergraduate students which have an interesting story behind them or are on a subject of public interest. If you have a dissertation you wish to be included, please email press@harper-adams.ac.uk