It is a pleasure to be involved with the Gold CREST projects and watch the next generation of STEM students engage in practical science.” 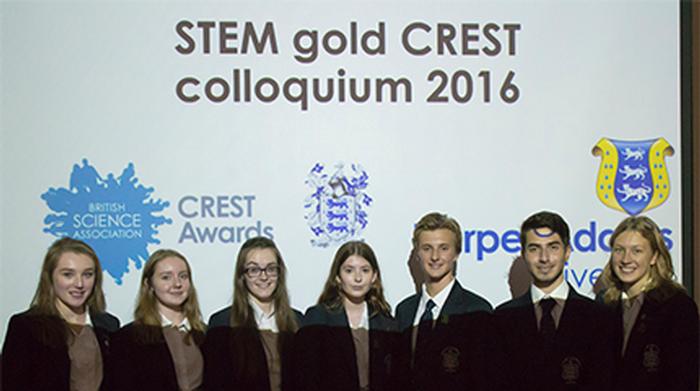 Seven sixth form students spent some of their summer at Harper Adams University to complete a research project for their CREST Gold Award.

Laura Hawkins, Katie Roberts, Ellie Jackson-Smith, Ellie Burnett, Ben Hawthorne, Mustafa Al-khaldi and Emily Martin-Vasquez worked on a variety of research projects over the summer with STEM ambassadors and mentors at Harper Adams as part of their applications for the British Science Association's CREST Award scheme.

All of them hope that completing the Gold level award will help to enhance their personal statements when they apply to study at university.

Jane Cooper, technician and STEM co-ordinator, said: “It is a pleasure to be involved with the Gold CREST projects and watch the next generation of STEM students engage in practical science.”

The students from Adams’ Grammar School, Newport, had to spend of minimum of 70 hours on their project; as part of their assessment they had to submit a scientific report on their research project and prepare a ten minute presentation of their work to an audience.

The presentations were given at a colloquium, which was held at Harper Adams.

The event was attended by the students’ parents, teachers from Adams’ Grammar School including STEM liaison teacher Dr Sam Moore and the headmaster Mr Gary Hickey, Harper Adams mentors and STEM ambassadors, as well as other members of Harper Adams academic staff. Each student presented the findings of their research and took questions from the floor.

On closing the session, Mark Robinson from STEM-NET thanked all those involved with the STEM projects and complimented the students on the quality of their presentations. He said: “To witness first-hand how STEM Ambassadors from Harper Adams are preparing students from Adams Grammar for the next steps of their education by insisting that reporting for the CREST Award is already matching a university standard was proof of how influential the SA programme is when handled so professionally by an educational establishment.”

One of the students who took part was Ben Hawthorne. He said: “My project consisted of researching little beetles, called vine weevils which are no bigger than a thumb nail.

“When you put them together, one climbs on top of the other’s back. Research has shown that this is linked to showing dominance.

“What they were uncertain about is which one goes on top; whether it’s the heavier one or the lighter one. That’s what I’ve been looking at with my project. I weighed the vine weevils every week and paired them up, so there was always a heavier or lighter one together. I would then observe what happened for approximately thirty minutes.

“My results showed that it is nearly always the heavier vine weevil that climbs on top; so it appears that this really is a sign of dominance.

“Entomology lecturer Dr Tom Pope was very helpful. He guided me along the way. He was a bundle of knowledge; whenever I had a question, he always had an answer.

“I really want to do zoology or biology at university, so this has been really useful. Especially, as I’ve been looking at animal behaviour.”

Dr Tom Pope said: “It has been a pleasure to introduce Ben to entomological research and we hope that this will be the first of many entomology focused STEM projects.

“Ben’s research has genuinely advanced our understanding of vine weevil biology. As such, Ben’s work has informed ongoing work on this species of insect at the university.”

“They have developed a huge range of skills which will be invaluable for success Higher Education. Their projects have collected some interesting, novel and robust data which not only enhances our on-site data but in some cases provides further areas for small mammal research at all levels.”