Our findings confirm that biochar can benefit farms in low-nutrient, acidic soils such as in the tropics. But in more fertile soils, such as those in the temperate zone, obtaining yield increases through biochar application is much less certain." 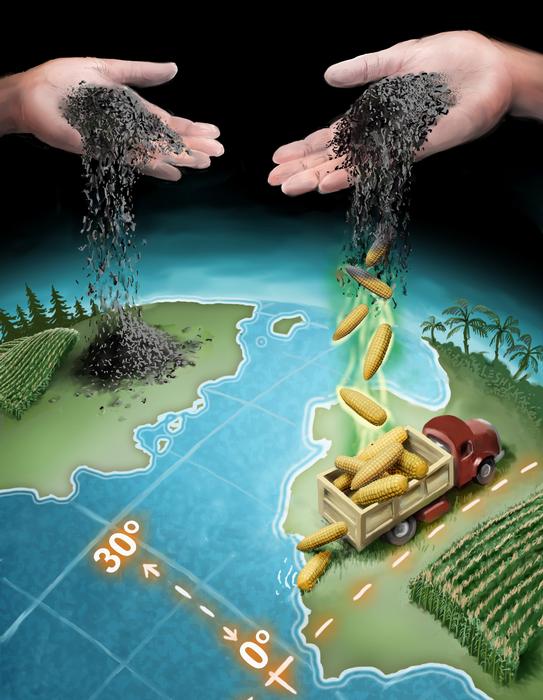 For years, biochar has been promoted as a soil additive to increase crop yields. A new study casts doubt on that view, finding that biochar only improves crop growth in the tropics, with no yield benefit at all in the temperate zone.

The team of researchers gathered data from more than 1,000 empirical observations conducted around the world, each measuring the effect of biochar on crop yield. Then, they used meta-analysis, an advanced statistical technique that analyses many studies at the same time, to test whether the beneficial effect of biochar addition depends on geography.

That’s when the surprising result emerged: “Location, location, location: it really matters for biochar,” said Dr. Simon Jeffery, lead author of the study and senior lecturer at Harper Adams University. “Biochar had a huge benefit in the tropics, a 25 per cent increase in yield. But in the temperate zone, there was just no effect at all. We were really surprised.”

The surprise came because past work has assumed that the beneficial yield effects of biochar are universal, applying to soils no matter where they occur. The new study was the first to test rigorously whether geography matters, and the researchers were able to do this because of the very large dataset they assembled.

The idea of biochar was inspired by a rare type of soil that occurs in the tropics, ‘terra preta’ – Portuguese for ‘black earth’, so named because the soil is rich in black carbon, the partially burned remains of old plants, much like charcoal. ‘Terra preta’ is fertile, with favourable pH, unlike typical tropical soils which are low in fertility and acidic. Initial experiments showed that adding biochar to typical tropical soils increased crop yields, making it possible for farmers to cultivate a plot of land in these soils for more than a few years.

The new study supports that view: “Our findings confirm that biochar can benefit farms in low-nutrient, acidic soils such as in the tropics”, explained Dr. Jeffery. “But in more fertile soils, such as those in the temperate zone, obtaining yield increases through biochar application is much less certain.” While it is possible that, biochar may maintain yields in some soils, while cutting costs on the purchase and application of fertilisers and agricultural lime, more research is needed to identify soils where such applications are relevant.

Many other benefits have been claimed for biochar, including managing waste, sequestering carbon in the soil, soil greenhouse gas flux mitigation, crop disease suppression, and being more environmentally friendly than adding synthetic chemicals to the soil. The new study did not evaluate these other potential benefits, and the authors note that some of these may still hold in both temperate and tropical regions, and that biochar research needs to focus on trade-offs between biochar’s interaction with these ecosystem services.

“While there may be other benefits to using biochar in the temperate zone, like increasing soil carbon to slow climate change”, said Dr. Jeffery, “our analysis, summarising over 1,000 observations, shows that the yield benefits just aren’t there. So if the goal for biochar application is boosting crop yield, stick to the tropics.”

The report has been published, open access, in Environmental Research Letters.