Improving how healthy dairy products are by feeding cows microalgae

“By increasing the level of omega-3 in cheese, which is already integrated into many people’s diets, they can have this healthier benefit without having to alter their eating and shopping habits." 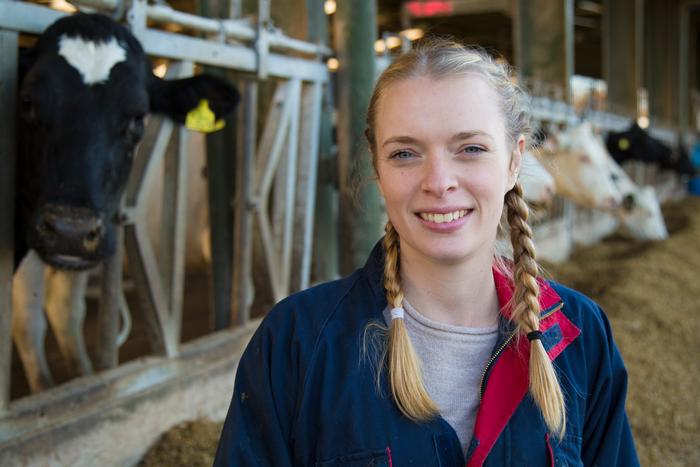 A PhD student at Harper Adams University has successfully increased the level of long chain omega-3 while reducing the level of saturated fatty acids in cheese and producing the same the taste, by feeding microalgae to cows.

Bethan Till, 26, from Caernarfon, Gwynedd, said: “The aim of my project was to improve how healthy dairy products are by increasing the amount of omega-3 present in milk and therefore cheese.

“Western diets are providing less than recommended levels of long chain omega-3 polyunsaturated fatty acids which are beneficial to human health. Fish is typically regarded as a natural source of omega-3s but the levels are diminishing and less fish is being consumed.

“Omega-3 is important because it has many benefits including lowering the risk of developing cardiovascular diseases and depression, along with improving general mental health and enhanced children’s learning ability.

“By increasing the level of omega-3 in cheese, which is already integrated into many people’s diets, they can have this healthier benefit without having to alter their eating and shopping habits. It’s also a good route to ensure that children achieve good intake levels of omega-3s as they’ll more readily consume milk and cheese, than say fish.

"We’ve managed to increase the level of omega-3 by feeding microalgae to cows. Microalgae is at the bottom of the food chain and is eaten by fish, which are consequently rich in omega-3, so we knew it’s a good source.

“The study was conducted on high yielding Holstein Friesian dairy cows, which were allocated one of four diets. Three of these diets contained microalgae at different levels to establish which produced the best results. We found that microalgae at a medium level worked best.

“From the cheese tasting panel, we found that there were also no negative effects on taste. The trained panellists described it as having a pleasant, nutty flavour. The colour and texture were also very similar to regular cheeses.

“Currently, we’re also looking at whether the microalgae improves fertility but it’s early days and we’ve yet to gather results. Other researchers from Florida have reported that this microalgae improved reproduction in dairy cows by increasing pregnancy rates and reducing days to pregnancy.

“I’d like to thank Alltech for sponsoring this project and to my supervisors Professor. Liam Sinclair and Dr Jim Huntington for their time and support, along with Dr Wilatsana Posri for her help in setting up the tasting panel.”