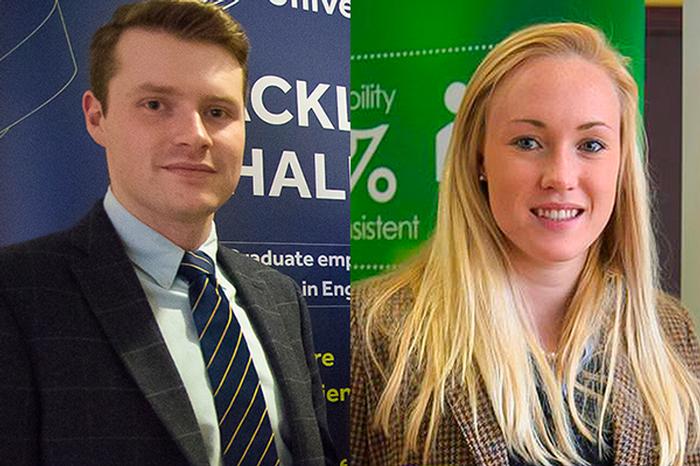 Two Harper Adams students have been shortlisted for the title of Agricultural Student of the Year in the British Farming Awards 2018.

Matthew Rollason and Alice Clews are both due to graduate with honours from agriculture degrees at Harper Adams in September. Both were nominated by the University for the award, in recognition of their outstanding academic performance, placement year performance, broader commitment to the University and commitment to agricultural sector. They will join three students from three other universities at the final in October.

Matthew, 22, from Bury, Lancashire, recently completed the BSc (Hons) Agriculture with Animal Science programme. Despite not coming from a farming family, Matt has had a passion for farming for as long as he can remember.

Prior to starting his studies at Harper, Matt developed his practical skills through work experience at a range of farms, and his knowledge with a Level 3 Diploma in Agriculture at college.

Matt received a scholarship to attend the 17th World Hereford Conference in Uruguay in 2016. He is the junior representative for the North of England Hereford Breeders Association, coordinating its youth programme, which has also involved charity fundraising. He arranged his own trip to Australia last summer for three months to the world-renowned Mawarra Hereford stud, where he secured a substantial semen deal between them and Cogent Breeding.

This, plus his passion for and dedication to beef cattle, set Matt up to secure his placement year in Genetic Procurement at Cogent Breeding. He excelled on placement, managing a project to boost the performance of the company’s Precision Fertility Service. All of his recommendations were fully implemented by Cogent.

Describing a further placement success, Matt said: “I was instrumental in the early development of a new financial index – ‘Beef Impact’. This innovative tool has since been rolled out internationally to meet the growing demand for dairy-bred beef. Over the next 15 years, 80% of beef is expected to derive from the dairy herd, and this fundamental tool will play an important role at the forefront of the UK livestock industry.”

About the award shortlisting, Matt said: “I am both amazed and honoured to have been shortlisted for the Agricultural Student of the Year title and will be proud to act as an ambassador of Harper Adams at the British Farming Awards in October.”

Alice, 23, from Wetherby, West Yorkshire, graduates from the BSc (Hons) Agriculture with Crop Management degree. Her passion lies in the arable sector but like Matt, she doesn’t come from a farming family. That didn’t stop her joining a Young Farmers Club when she was 14 and beating her own path to success in the sector.

Alice secured the Syngenta scholarship during her second year at Harper Adams, gaining not only financial support from the company but also a placement year job in the trials team. She used skills gained at Syngenta for her final year Honours Research Project and went on to secure a graduate role at Syngenta as a Commercial Unit Trialist.

Alice has received further industry backing in her early career – she travelled to Agritechnica in Germany in 2017 thanks to support from the Oxford Farming Conference and German Agricultural Society DLG. A YFC Alma Baker Trust Scholarship took her to New Zealand to work and travel in 2015.

Her Young Farmers involvement has also taken her to Jamaica, to volunteer at the Christiana Potato Growers Cooperative Association.

In her final year at Harper Adams, Alice was part of the University’s team in the annual Cereals Challenge, which won the social media aspect of the competition.

Alice said: "I’m overwhelmed and delighted to be one of the ag student finalists. It’s great that the award recognises student achievements and wider industry commitments so I am honoured to have been nominated alongside the other finalists.”

Also among the Harper students and alumni shortlisted for British Farming Awards are Emily Hickman and Hannah Morgan, both for Digital Innovator of the Year.