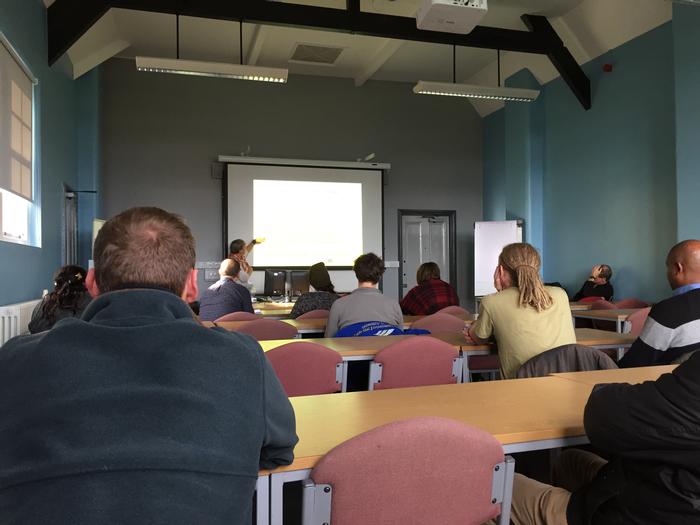 Professor Ruth Dill-Macky from the University of Minnesota and researcher co-chair of the United States Wheat and Barley Scab Initiative (USWBSI) has visited Harper Adams and presented a research seminar entitled: Fusarium head blight (FHB) of wheat: progress and challenges.

Professor Dill-Macky started the presentation with an introduction to wheat production in the US and common diseases, which include FHB, tan spot, septoria leaf and glume blotches, leaf rust, stem rust and the emerging issue of bacterial leaf streak.

Fusarium head blight is a fungal disease that affects cereal crops. It infects the head of the crop and reduces grain yield. It strikes late in the wheat’s growth cycle when the plant flowers; about two weeks before it turns golden brown. Wheat with FHB has a bleached-out tan colour on its head, reduced seed weight and contains mycotoxins.

“FHB re-emerged in 1992,” she explained. “It’s the most important disease to limit wheat production in the United States and is increasingly important globally.

She also explained that in 1996, the presence of deoxynivalenol (DON), a mycotoxin produced by the fungus Fusarium graminearum, which causes FHB, led to the conversion of all white wheat to feed. Chronic DON contamination also led to significant yield losses of soft red winter wheat in 1996 to 2003.

It was decided that a national initiative was required and this is where the USWBSI comes in.

“Probable causes for the increase in FHB were the weather patterns that were favourable to FHB, susceptible cultivars that weren’t tested during their development, expanded corn production and reduced tillage practices.

“I think we’ve been pretty successful over time in regards to resistant varieties which is great as 58 per cent of our funding goes on variety development.

“We’ve also made two prediction models. Recently we’ve moved to being able to send this out as a text alert, with no cost to the users.

“The value of the alert system has been estimated as $170m.”

Continuing and future challenges for the USWBSI include the adoption of varieties with improved FHB resistant varieties along with maintaining identity of resistance in marketing. In addition, the ever increasing corn acreage, limited options for rotations in many production systems and impact of climate change on Fusarium species.