“My project was to create a prototype to control the air flow in broiler houses, taking into account the birds’ heat loss and behavioural response to draughtiness." 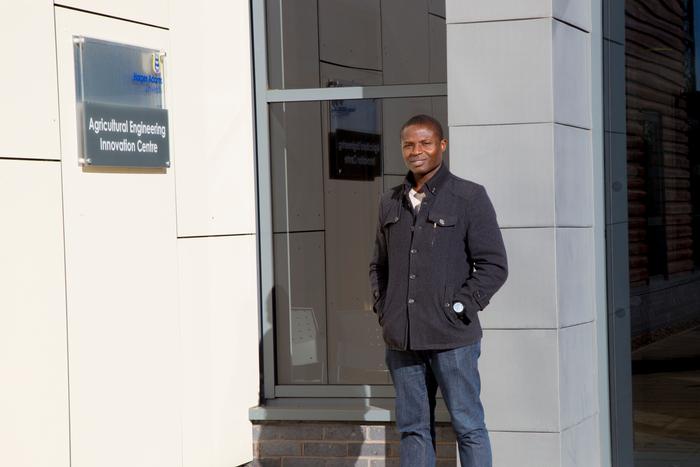 A prototype for a new poultry ventilation system has been created at Harper Adams University as part of a PhD project with the aim of improving the welfare and production of chickens raised for consumption, which are labelled as broiler chickens within the industry.

Globally, there are over 40 billion broiler chickens produced annually. The demand for chicken has risen in the UK leading to new broiler housing being introduced.

Although this housing is designed to improve broiler welfare, there is some evidence that the microclimate around the birds in these environments is not attuned precisely enough to their needs as there can be too much draught.

Ayoola said: “When the weather is very hot, birds find it hard to regulate their temperature and this leads to farmers losing birds.

“My project was to create a prototype to control the air flow in broiler houses, taking into account the birds’ heat loss and behavioural response to draughtiness.

“We hope an improved system will lead to an improvement in production, health and welfare.

“Different ventilation systems have already been developed to alleviate overheating but they can be costly and we’re trying to modify and utilise what’s already available.

“I want it to be affordable for farmers and be energy efficient.

“The prototype I’ve created isn’t at full power all the time so it doesn’t add additional costs to the farmers. It fluctuates the air that comes from the inlets and as it fluctuates it distributes the air better between the birds.

“With this system I did see an improvement in air flow around the birds.”

An important part for broiler house ventilation systems is the air flow near the wall. Ayoola has made good advances in this area but there’s still more that he’d like to improve along with other elements.

“When the birds are in the same location, moisture levels rise and this can cause problems for them, such as breast blisters, hock burns and poor feather quality.

“Therefore, this system could ultimately improve the welfare of the birds, productivity and the condition of the building.”

Interestingly, one of the approaches that Ayoola used to test his system was by using footballs as broiler models, as previous research had shown that chickens are spherical in shape.

This alternative way of testing his system was critical during a time when the UK was facing issues with avian influenza which stopped Ayoola being able to run tests on two separate flocks as originally planned.

On where his system could be used, Ayoola said: “It can be used nearly anywhere in the world. Currently, in Africa the poultry housing is very open, so they are naturally ventilated, but in contrast, some of the farms in the USA and Europe are using tunnel ventilation which is expensive in terms of initial investment and maintenance.

“There are some other systems that have been researched but in humid environments, which can be seen in countries like the UK, they can cause a number of problems as they raise moisture levels within the poultry building.”