“I was inspired to carry out my project after working for a food manufacturer on placement last year when I was provided with a company phone." 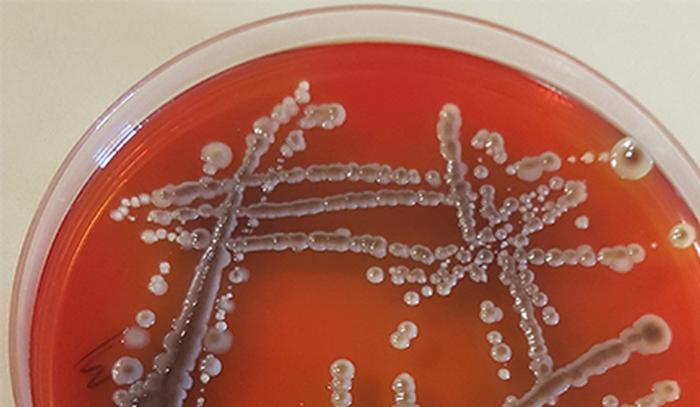 Two final year students have been getting up close to bacteria on two of the things we touch regularly: the screens of our smart phones and the handles of supermarket trolleys.

The Honours Research Projects by Emma Morgan and Reece Smith offer a good comparison due to the ways in which we come into contact with these surfaces. A smart phone is used generally by only one person, while trolleys are handled by many, while there are serious implications for broader hygiene from both, especially when considering interactions with food.

Then, the project moved on to some testing; swabbing one half of 59 phone screens from staff and students to take the bacteria, before cleaning the area and moving on to the other half. This provides a ‘before and after cleaning’ effect. That’s not where the project ended: the same process was also followed on photocopiers at the university, while the swabs were screened for a number of key pathogens.

Emma, 23, said: “I was inspired to carry out my project after working for a food manufacturer on placement last year when I was provided with a company phone. During the year I had to use it extensively to take photographs of kitchen samples when preparing them and whilst cooking. This led me to consider how personal electronic devices and smartphones in particular are being used by people whilst preparing food, whether that be to communicate or as a cooking aid. It led me to wonder whether people are undertaking the necessary food hygiene practices to prevent cross-contamination from occurring between food and their devices and so whether personal electronic devices could have the potential to transmit foodborne disease.”

As it turns out, they can – though photocopiers were found to have a significantly greater bacterial load when compared to the smartphone devices, due to them being utilised by multiple people. Pathogen prevalence differed between the two devices, with photocopier samples containing three times more E.coli species than smartphone samples.

It’s not all grime and gloom though - avenues exist through which the potential for bacterial cross-contamination of food from personal electronic devices can be reduced. Baby wipes were found to be the most effective material for cleaning smartphones - more effective, in fact, than specially made smartphone cleaning wipes. There is also a potentially bigger role for companies to play.

Emma, from Kingsbridge in Devon, said: “Mobile phone manufacturers and the government should provide clear, informative messages on how to safely and effectively cleanse devices as well as the importance of cleaning devices regularly. Additionally, consumers should be informed about how to safely use personal electronic devices whilst cooking to prevent cross-contamination.”

Reece Smith, 21, has been looking at five different supermarkets to see if there is any difference between them in microorganism contamination and what bacteria are on the trolleys. In addition to this I have been looking at testing the antibiotic resistance of the bacteria. He said: “I was interested in looking at this area of microbiology as it has profound real world consequences for the general public's health and well-being. These fomites (commonly touched surfaces) offer a perfect environment for microorganism transmission and could potentially be used for terrorism purposes as they are accessible, touched by many people and easily transfer substances.”

The project involved an element of stealth, as Reece explained: “Due to the nature of this subject, I was not able to notify the supermarkets that I was doing the swabbing, as they may try to clean them, invalidating the results. I had to discreetly go to the premises of the supermarkets and using a sterile glove, wipe the entire breadth of the handle to collect microorganisms to take to the labs, then these would be transferred to the laboratory at Harper.”

Following this clandestine work, further testing could be done such as working out microorganism numbers on the trolley handles, isolating the pathogens E. coli, Salmonella, Shigella and Staphyloccus and testing their antibiotic resistance. The results certainly provided food for though. Significant E.coli contamination was found on over half the trolleys tested, while only one trolley out of 75 had showed presence of Salmonella. During the antibiotic resistance testing, over 50 per cent of the trolley handles showed presence of drug-resistant bacteria.

Reece said: “Overall this means that trolley handles pose a significant risk to public health and well-being. However despite this, most of these bacteria which will have been found on the trolley handles will not affect humans as they will not be a pathogenic strain, however this could still act as a means of transmission. Despite this I won’t be changing my habits when I go shopping - I won't be taking alcohol sanitise with me. However, I would still advise that supermarkets implement a cleaning routine for the trolleys to prevent an outbreak.”

Project supervisor Frank Vriesekoop said: “Both these projects are in an interesting area of work. We often don’t give much thought to things that we touch or touch us, whether they’re what everyone touches or what just one person touches. Often, though, these things relate quite significantly to food preparation and eating. This work could lead to a better understanding of the relationship between pathogens and contact, and potentially provide some insight into what this means for the food industry.”

Reece is now ready to work alongside Frank and a student from HAS in the Netherlands to help gather more evidence, with the intention of publishing the research. This could have implications for the future practises of supermarkets.