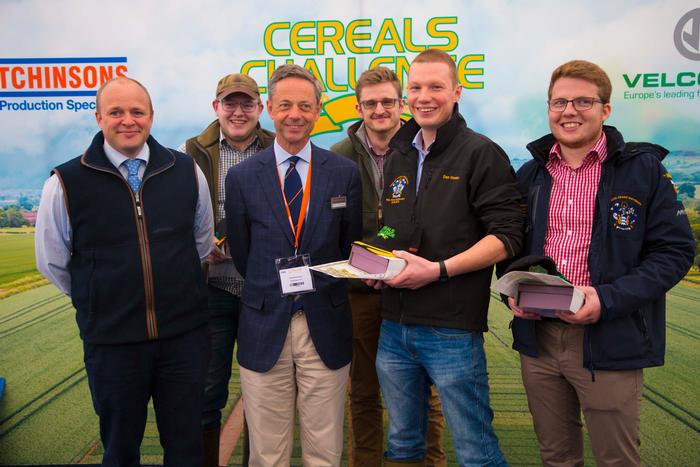 The Harper Adams University team competing in the Hutchinson and Velcourt’s Cereals Challenge 2019 have been named the competition’s winners during the annual Cereals event, this year hosted in Lincolnshire.

The competition is aimed at encouraging the next generation of farmers and agronomists into the industry.

“I think they’ve been excellent; especially as they’ve been doing this through the final part of their final year. It’s a testament to their ability.”

Dan said: “I’m in a bit of shock at us being named the winners. We had no idea how we were going to do. I can’t believe that we’ve won; it’s great.

“We faced five challenges across the course of the competition. The first challenge was what variety to plant, at what seed rates and how we were going to establish it. The second one was all about fertiliser, third was herbicides. Fourth one was fungicides and then fifth challenge was an environmental challenge which was also marked by the Game and Wildlife Conservation Trust (GWCT) Allerton project.”

For the third year in a row, the challenge was a virtual one, seeing the team unable to interact with a physical crop. Dan said: “I think the virtual element to the challenge made it more difficult; especially for the fungicides because what you do depends what’s in the field and because it’s a virtual crop we were having to go on assumptions which wasn’t the same as being able to see it. Apart from that it worked quite well.”

George added: “Working on a virtual crop was interesting. We couldn’t go in and then make changes; we had to make assumptions. But we’ve obviously done well.”

“Working with a virtual crop has been frustrating,” Tom said, “because we tried to take an integrated approach from day one; trying to account for problems which we were told had arisen and we’d already sorted it out. It was challenging but a good experience.”

Dan added: “We tried to approach it by covering all of the bases. We did a plan of recommendations for a low risk year and another for a high risk year. At the time that we were planning the recommendations, it hadn’t rained, so it’s quite low risk but by the time that it was to be applied it, it might have rained. You just don’t know what’s going to happen. We decided that we wanted to try and cover both of those bases.”

On how they got on as a team, Danny said: “It’s been really easy to work together as a team. There have been some discussions but it’s all been done with great respect for each other and we’ve all clicked from day one. It’s been amazing to work with everyone.

“I’m really pleased that we’ve won. We put a lot of effort into. We worked hard for the past three or four months, and obviously our hard work has paid off.”

All of the team members have secured graduate jobs which they will be starting in a few weeks’ time or by September.

The winning team was announced on the Hutchinsons stand at the Cereals Event on 12 June. There Harper Adams team were awarded a trophy and total monetary prize of £1,000, plus £500 for the University.