“We’ve identified five potential benefits of biochar, but due to how variable it is, it’s not possible to maximise all five benefits at the same time; trade-offs are inevitable." 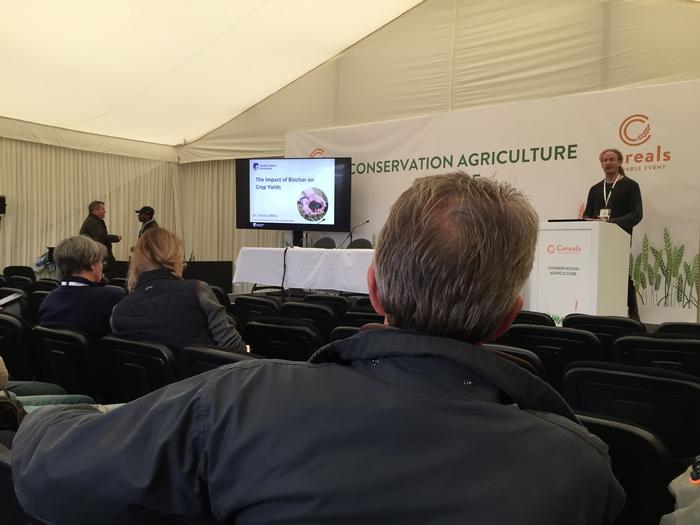 He started the presentation with a brief introduction to biochar and highlighting the variability in biochar properties due to being made from different materials and heated at different temperatures.

Dr Jeffery said: “Biochar is a 15-year-old concept, and the idea is based on soil known as Terra Preta from the Amazon Basin. There the soils are normally naturally sandy and rapidly lose fertility, but in the 1960s Terra Preta was first discovered by a European soil scientist who reported that those soils remained fertility year, after year, after year.

“Biochar has been said to have numerous benefits for crop yields and the environment; including some claims that it can save the planet.

“The overhype has come mainly from the popular press, where the positive and negative perspectives have often been overstated, but unfortunately some of this hype has been present in the scientific press at times.”

Dr Jeffery published a paper in 2015 to tackle and dispel some of the myths, with the aim of getting researchers to take a more realistic view as to how different benefits can be maximised.

“We’ve identified five potential benefits of biochar, but due to how variable it is, it’s not possible to maximise all five benefits at the same time; trade-offs are inevitable.

In 2017, Dr Jeffery published a report based on a global scale meta-analysis which showed that biochar could be beneficial to soils in the poorer quality soil in the tropics, but generally not to European soils. (Read the story here: http://harper.ac.uk/sjcereals19).

Dr Jeffery added: “Some of the benefits could be due to the biochar acting as a liming agent, raising the soil pH. However, when the cost of biochar (~£2,000 per tonnes) is compared with lime (~£25 per tonne), it’s clear that it’s not the most economical solution.

“However, biochar can have other environmental benefits; such as reducing N2O emissions from soils and composts as well as increasing water retention in some soils and functioning as an effective waste management solution whereby pyrolysis, the process that produced biochar, can add value to waste materials through the extraction of biofuels alongside the produced biochar.”

Currently, biochar is classified as a waste product, and therefore cannot be used for commercial farming in the UK, which also restricts its use. However, with more pyrolysis plants coming online all the time in the UK, biochar is not a substance that is going to disappear anytime soon and so finding the optimum use for it remains an ongoing research issue.