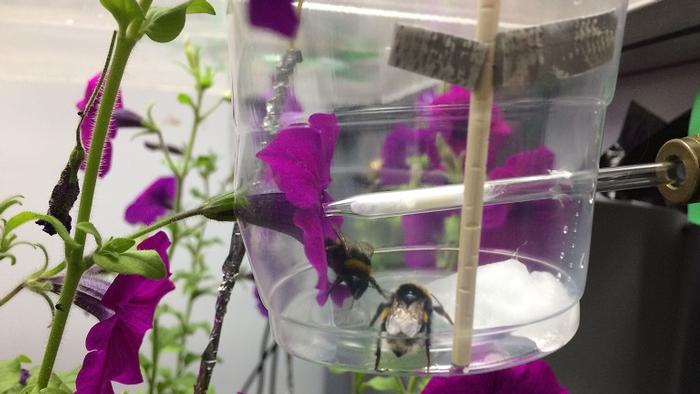 Bees visiting a petunia flower in a live bee flower experiment. Credit: Clara Montgomery. Please note,this picture is only to be used to illustrate the research in this study.

New research by a Harper Adams University lecturer has found that the electrical charge created by visiting bumblebees stimulates some flowers to release more of their sweet-smelling scent.

This is the first time a plant has been shown to use the presence of pollinators as a cue to emit more of its attractive perfume - increasing its chances of being visited.

The tiny electrical charge carried by bees is thought to help pollen stick to them during flight but a team of researchers from across the UK have found that it can also announce their presence to the flowers they visit.

Lead author, Dr Clara Montgomery, who was funded by the BBSRC, and carried out the research while at the University of Bristol, said the trait possibly evolved in plants to maximise the effectiveness of the attractive chemicals they release.

Dr Montgomery – who is a lecturer in Animal Health, Behaviour and Welfare at Harper Adams University – said: “Flowers have a limited supply of these scents, so it makes sense they only release them when their pollinators are around.  Essentially, it is only worth advertising when you know you have an audience. Other cues they might use, such as daylight or temperature can be unreliable, as it might also be windy or raining, which would reduce pollinator presence.

“These scents are also used by insects that want to eat or lay eggs on the plant, so increasing their chances of only attracting pollinators is vital.”

The electrical charge on a bumblebee – somewhere in the region of 120 picoCoulombs (pC) – is incredibly small but the team found a charge of 600 pC, or about the same as five bee visits, was enough to induce a species of violet petunia, Petunia integrifolia, to markedly release more scent.

Using specially constructed foraging arenas, the team of researchers – from the University of Bristol, Rothamsted Research, and Cardiff University - were able to measure the electrical charge carried by each bee, as well as the amount of the main attractive chemical, benzaldehyde, released by the flowers in response to visits by bees.

To help distinguish between a flower’s response to the mechanical stimulus of a bee landing and the electrical stimulus, scent release was also measured in a subset of petunias that were touched with either a grounded metal rod or an electrically charged nylon ball.

Flowers visited by free-flying bumblebees exhibited a significant increase in volatile production. By contrast, flowers touched with an electrically grounded metal rod did not show such increases.

When touched with the electrically charged ball, with a charge equivalent to about five bee visits, the scent emissions from petunia flowers were significantly increased again – roughly doubling the average volume of scent.

Pollinators have long been known to carry positive electric charges, but this is the first demonstration of plants using this to their advantage, added Dr Montgomery.

“Frequent visits by charged pollinators to a flower would cause charge to build up, which might exceed a threshold for scent release. Charge could therefore provide a useful indicator of how many pollinators are in the area, allowing the plant to assess the real time potential for pollen dispersal.

“Current understanding of the electric charges carried by different insect species is very low and the influence of electric fields on all biological systems is often poorly understood and hard to quantify.”

Project leader, Professor Daniel Robert from the University of Bristol, said: “This discovery unveils a previously unknown type of interaction between insects and plants, a world of elusive electric cues, that us humans cannot detect.”

He also highlighted the innovative value of the multidisciplinary collaboration between scientists in Rothamsted and the University of Bristol, involving chemical ecologists, plant physiologists and bee sensory ecologists.

“Insects are the dominant pollinators in agroecosystems, providing pollination services for many of our crops. The better we understand pollinator-plant interactions, the better we can preserve pollinating insects and ensure food security”, added Dr József Vuts, chemical ecologist at Rothamsted and co-author.