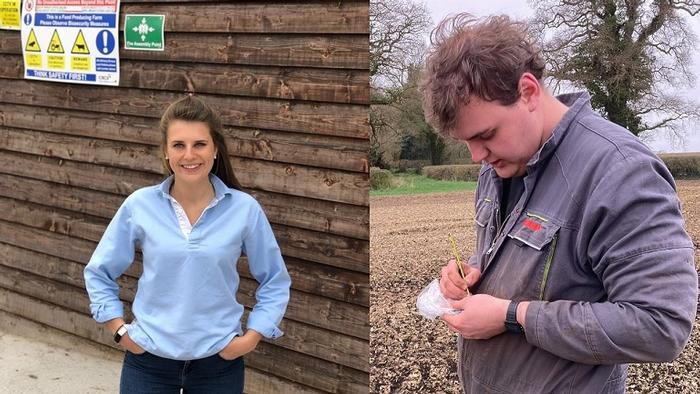 Emily, from Herefordshire – who has secured a role with CXCS as a Trainee Health and Safety Adviser – received her award for her project, A study on how to drive change and improve farm safety.

Harper Adams Senior Lecturer Terry Pickthall, who supervised Emily’s work, said: “Emily’s project was entirely her own idea. She obtained a staggering 1,000 responses from farmers around the UK, demonstrating her passion for the subject of farm safety and her considerable ability to network, communicate and influence.

“Emily’s conclusions provided some very insightful data on the UK farm community’s thoughts and attitudes towards on-farm accidents and improving safety, an area on which there is little published independent research. It was an excellent piece of work that I was proud to supervise and wholeheartedly endorsed it for a Claas scholarship.”

Philip, who is originally from Schleswig-Holstein, Germany, and is now living near Framlingham, Suffolk, had previously worked with spreader company Richard Western and based his study on one of their machines.

“Despite the difficulties of pandemic restrictions, he showed professionalism by stepping up to overcome the challenges of both logistics and safety compliance and by conducting planned field testing - rather than taking the simpler option of rescoping his work to a paper study.

“Statistical analysis of the field experiment results indicated the optimum setup of the machine which Philip has been able to feed back to Richard Western.

“Through his dissertation, Philip demonstrated both the skills and professionalism that will make him successful in his engineering career.”

The CLAAS Foundation was founded in 1999 and has since awarded the Helmut Claas scholarships, bonus prizes and international prizes on an annual basis.