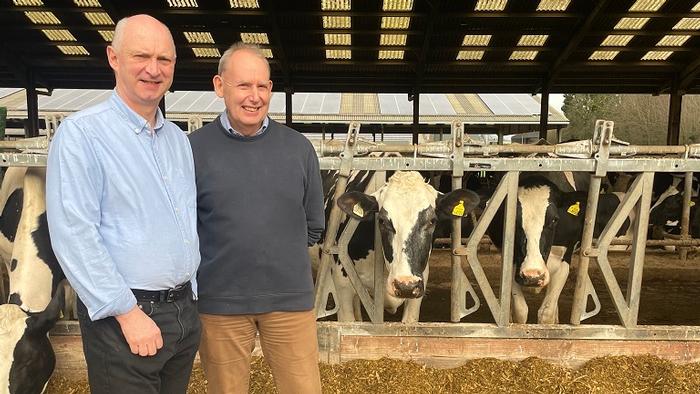 A new edition of the renowned textbook Animal Nutrition has been published – with two experts from Harper Adams University playing a key role in its authorship.

Professor of Animal Science Liam Sinclair and Principal Lecturer Dr Robert Wilkinson worked together to co-write both the seventh and newly-published eight edition of the work – which has been a core text for students for almost six decades since its original publication.

Professor Sinclair said: “We both feel very honoured to be involved with such a long-standing and prestigious book as Animal Nutrition”.

“The first edition was published in 1966 and you can often tell when students were at College or University based on the edition that they have on their bookshelves.”

The book is a core text for students across a wide range of undergraduate disciplines, from Zoology to Animal Science and from Agriculture to Veterinary Science.

It has been praised as ‘the most comprehensive textbook covering nutrition of animals available in the UK by far.’

“The layout of the book helps the students as their course progress from the fundamentals of feed chemistry to recent advancements in areas such as nutrigenomics.”

Keeping a textbook such as Animal Nutrition up to date has meant a series of revisions by Professor Sinclair and Dr Wilkinson, among others, drawing upon a wide array of evidence to ensure it remains at the cutting edge of its subject.

The new edition also reflects wider concerns such as reducing the environmental impact of animal production and increasing the nutritional value of animal products as well as –industry developments in animal food production, which are increasingly being reflected in university degrees such as those at Harper Adams.

Dr Wilkinson added: “We feel that one of the cornerstones of the book is this evidence-based approach, relying heavily on information published in peer-reviewed, academic journals, including work that has been published by ourselves and colleagues at Harper Adams University.

“The nutrition of animals has changed considerably since the first edition, with tremendous advancements in our understanding of raw ingredients, digestion and metabolism, as well as rationing systems that allow us to put the theory in to practice, and we wanted the eighth edition to reflect this.

“We are also very conscious of the public perception of animal production and the need to reduce nitrogen, ammonia, phosphorus and methane emissions from farm animals, as well as improve animal health, welfare and product quality, all of which emphasise the need to more fully understand animal nutrition.

“We also wanted the eighth edition to have a greater emphasis on the nutrition of dogs and cats, as these are now very important aspects of many undergraduate degrees, as well as the animal feed industry.”