“I am absolutely looking forward to it! It will be such an exciting event, combining venerable tradition with modern day – sustainable – sheep. Although a ceremonial event, I hope it will help to remind the people of London that livestock have a very important role in British life.” 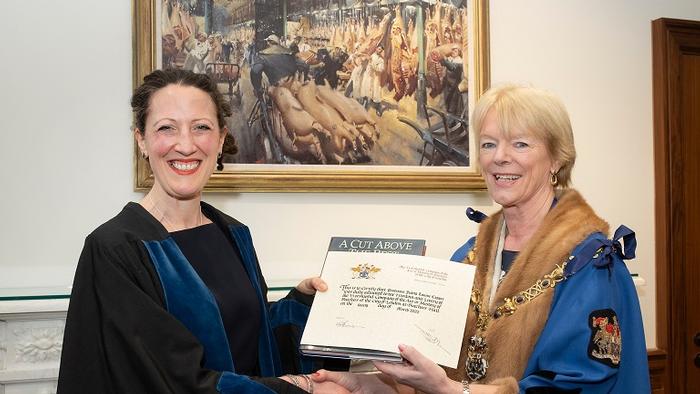 Professor Jude Capper with the current Master of the Worshipful Company of Butchers, Margaret Boanas.

A Harper Adams Professor is planning to exercise an ancient right to drive sheep through London after receiving the Freedom of the City of London by redemption.

The Freedom of the City – which allows Professor Jude Capper, the ABP Chair of Sustainable Sheep and Beef Production at the University – to exercise her right to drive sheep – was part of a process which culminated in her admission as Liveryman of the Worshipful Company of Butchers earlier this month.

She said: “It is such an exciting opportunity to become part of the Worshipful Company, both in terms of the networking and fellowship opportunities, and, through their charitable and educational mission, to make a real difference to the meat industry.”

“We have some real challenges facing the meat industry, including the need to attract, retain and support both new entrants and existing butchers. I really look forwards to help develop new opportunities to benefit the industry as a whole.”

The Worshipful Company of Butchers has long-standing links with Harper Adams, regularly welcoming students and alumni to events at Butchers’ Hall, the Company’s headquarters in London.

Earlier this year, the most recent event saw current students, plus a recent graduate from the University, invited to Butchers’ Hall for a special lunch at which their respective awards and scholarships were celebrated.

Jude – alongside other Harper Adams colleagues – was also in attendance, having become a regular visitor to the Hall as part of the process of working towards becoming a Liveryman of the company.

She added: “The admission process has stayed the same for centuries – after a formal interview at court at Butchers’ Hall to gain admission as a Freeman of the Company, I applied for Freedom of the City of London, and finally, Liveryman of the Company.

“It is such an honour and privilege to be part of a Company that can trace its history back to 975 AD.”

Traditionally, those with the Freedom of the City have the right to drive sheep across Southwark Bridge in London, with this year’s ceremony set to take place in September.

Having secured her status as a Liveryman – and with her obvious interest in livestock – it is little surprise that Jude is planning to take up this privilege this autumn.

She said: “I am absolutely looking forward to it! It will be such an exciting event, combining venerable tradition with modern day – sustainable – sheep! Although a ceremonial event, I hope it will help to remind the people of London that livestock have a very important role in British life.”

The Sheep Drive is one of a series of traditional events which members of the Worshipful Company of Butchers participate in – and Jude has already taken part in a second, the Boar’s Head Parade, earlier this year.

Such a wonderful Boars Head Ceremony yesterday - an absolute joy to be part of such an venerable tradition. Lovely to talk about livestock’s role in sustainability with @citylordmayor. Huge kudos to @MBoanas @WCBLivery and all involved. Boar’s head tasted amazing! https://t.co/HSKqP6dt3B

The Parade is grounded in an ancient tradition dating back to the 14th Century, when the Lord Mayor of London gave permission to the Butchers to use a wharf to cleanse and dispose of offal in the River Fleet, and was presented with a boar’s head in return as a peppercorn rent.

Despite that practice having long since ceased, the Parade itself lives on – with the Lord Mayor welcomed to a ceremonial feast afterwards.

Jude said: “The Boar’s Head Parade is a tradition which goes back hundreds of years – even through the world wars - the only year when it didn’t occur was during COVID lockdowns.

“I talked to the current Lord Mayor of London at this year’s feast about the role livestock within farming, food production and the circular economy, as he’s focusing on sustainability in his role this year. I hope that there will be many other opportunities, in conjunction with the Worshipful Company, to help promote sustainable livestock production over the coming years.”

Photo reproduced with thanks and credit to Phil McCarthy. 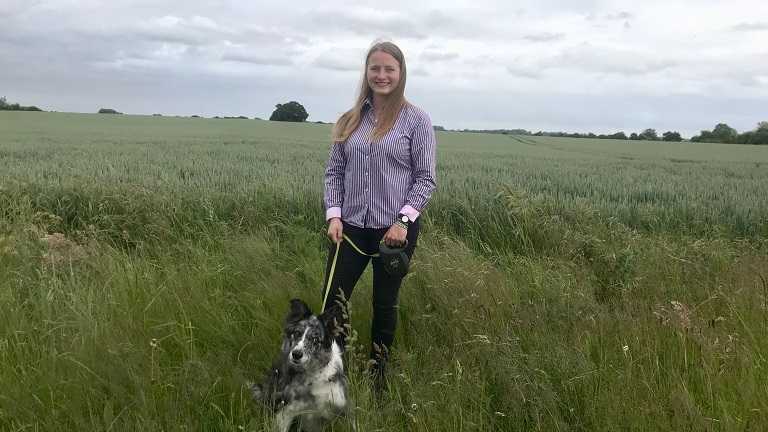