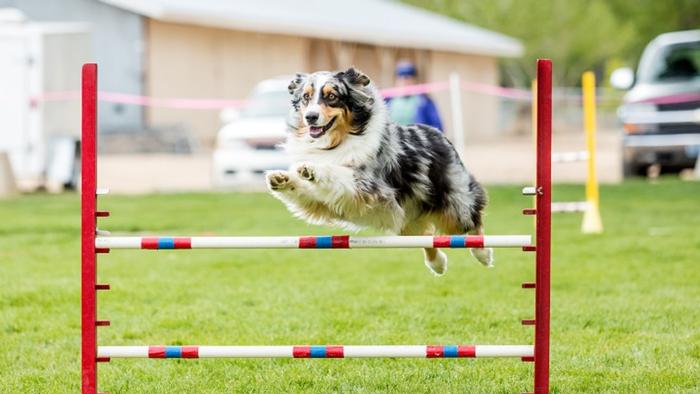 Reducing the maximum height of the scale attempted by dogs in the agility section of competitive working trials may help to minimise any potential impact upon their joints, a study has suggested.
Canine welfare experts at Nottingham Trent University and Harper Adams University, funded by The Kennel Club, examined how attempting the scale at various heights impacted dogs’ landing forces and the joint angles of their paws and shoulders. Working trials is a canine discipline and competitive activity that originated from police and military dog work but has seen little modification in its format since the 1960s.
Trials require dog and handler to undertake a number of tasks around scent work, obedience and agility – which includes clearing a 6ft scale and a 9ft long jump.
The scale obstacle is considered particularly physically demanding for dogs, which are required to climb from a static start on the ground to scale the obstacle and land in a controlled manner.
As part of the study, handlers were asked to work their dogs at three different heights, ranging from 5ft to 6ft.
Pressure-sensing mat technology and video analysis software was used to collect data.
The team found that when the scale height was lowered to 5’ 6” dogs had a reduced ‘peak vertical landing force’ and less compressed joint angles upon landing.
When it was lowered further to 5ft dogs altered their traversing style, jumping rather than scaling, and greater compression and increased peak vertical landing force was seen.
The study showed a degree of variation among the dogs, possibly related to factors such as size, breed, age, training and experience.
Potential concern has been raised in other canine disciplines that landing forces after traversing jumps may lead to soft tissue injuries in dogs.
Despite this, there has been little research into the impact of scale height on landing force in dogs participating in working trials.
“Evidence-based approaches to canine working trials are important to ensure minimum impacts on physical health and welfare of participating dogs,” said researcher Dr Anne Carter, a canine scientist in Nottingham Trent University’s School of Animal, Rural and Environmental Sciences.
She said: “The 6ft maximum height of the working trials scale is based on arbitrary measurements and our research indicates that a reduction in the height to 5’ 6” may have positive implications for dogs training and competing in this discipline.
“We recommend that the height is reviewed to help minimise any risk which may be present, while still maintaining the level of competitive challenge.”
Kathryn Mansfield, Kennel Club Secretary, added: “We welcome the findings of this research, which provide valuable insights into the potential impacts of reducing the height of scale exercise in working trials. Research like this helps us to ensure any risks for dogs taking part in and enjoying canine activities are mitigated and we will review the recommendations provided by this study thoroughly.”
The study also looked at the potential impact of the long jump during trials, although no specific differences were observed in landing forces at jump lengths of 9ft, 8ft and 7ft.
The study, published in the journal Frontiers in Veterinary Science, also involved Nottingham Trent University’s Dr Jacqueline Boyd of Nottingham Trent University and Dr Ellen Williams of Harper Adams University.