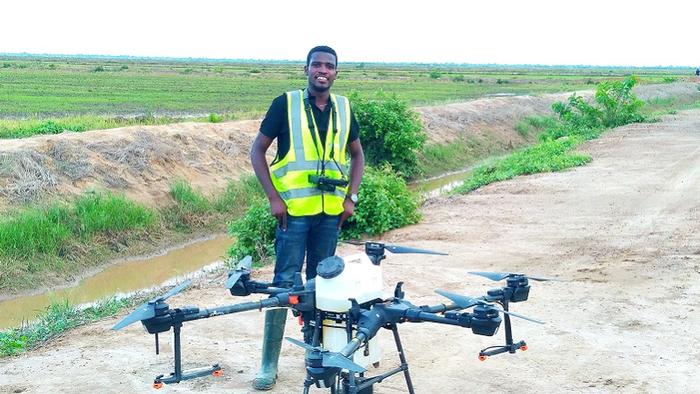 The work of a Harper Adams graduate who is developing drone and geospatial solutions for farmers has secured him an African Plant Nutrition Institute Precision Agriculture (APNI) award.

The award is the second in 2022 for Femi Adekoya, who studied for a Masters in Integrated Pest Management while at Harper Adams.

Femi, who is now applying his knowledge via his company Integrated Aerial Precision, was also the Royal African Young Leadership Forum for a prestigious Royal African Award in May.

Femi is also working to help train others – passing on the knowledge he gained during his studies at Harper, where alongside his Masters degree he also took courses to become a qualified drone pilot.

His latest award, from the African Plant Nutrition Institute (APNI), is intended to recognise the excellence of an early career professional in the field of precision agriculture research, outreach, or education in Africa.

He said: “Winning the APNI Precision Agriculture Young Scientist Award for me brings the feeling that my passion and efforts in promoting precision agriculture in Africa are being seen and are noteworthy.

“Consequently, I feel motivated to press on with the mission to see precision agriculture and technologies widely adopted across the African continent.”

The award was presented at the second APNI conference, in Nairobi, Kenya, during which Femi shared his thoughts about how precision agriculture is developing in Africa.

He told delegates that, in the coming decade, the continent is likely to see precision agriculture methods being adopted by African farmers – as long as the correct training is provided to young people.

“With Africa leveraging her youthful population and with this youth having the right enablement & support, I believe that in the next five to 10 years, precision agriculture in Africa will become a common practice.”