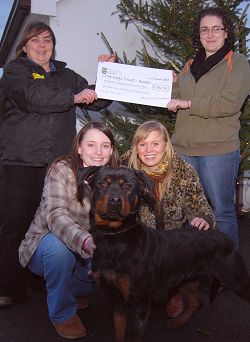 Clockwise from top left, Dogs Trust Roden Manager Louise Campbell, Rebecca Phillips, 22, from Chesterfield, Derbyshire; Kerri Mills, 21, from Solihull and Beth Heayns, 21, from Little Sutton, near Ellesmere Port, with Behr, a young Rottweiler in need of a new home, and the cheque for £825.

Dogs at a Shropshire rescue shelter received an early Christmas present when students from Harper Adams University College handed over more than £800 to help care for them.

Veterinary nursing students from all years of Harper's HND and degree courses took part in sponsored dog walks in October and November at the Dogs Trust home at Roden, raising money for the charity and lightening the load for the staff and volunteers there, and three final year students visited the kennels this week to hand over a cheque for the funds raised.

Despite the credit crunch, which has led to an increase in the number of dogs in need of new homes, the students’ friends and families, and college staff dug deep to support them to the tune of £825.67.

Home Manager Louise Campbell was ‘overwhelmed’ by the sum raised and said: “I’d like to thank all the students and everyone who helped them to raise this much money. It’s an amazing amount and will make a real difference to the dogs. It’s not often I’m stuck for words, but this is just wonderful, thank you so much! I hope you had fun doing it.”

As a charity, the Dogs Trust is always in need of donations to help it care for the thousands of dogs that pass through its rescue centres each year.

Louise said the Roden home, as always, would be grateful for donations of blankets and towels, and for tinned dog food. “Also, we’ve had a lot of greyhounds in recently, so any coats that can be donated will be welcome. These will also help the many older dogs that come in at this time of year.

“We get lots of older ones in November and December as people make way for the young dogs they bring home at Christmas, and then we get some of those puppies in the new year  - despite saying ‘a dog is for life and not just for Christmas’ for so many years, it still happens.”

To mark the 30th anniversary of this slogan, the Dogs Trust has commissioned new research that looks at its success and how our relationship with dogs has changed since 1978.

The slogan was the brainchild of Dogs Trust’s CEO Clarissa Baldwin and was developed to reduce the large numbers of dogs given as Christmas gifts each December only to be abandoned later the next year.

Not only is the slogan one of the most recognisable strap lines in the UK – but its message has been heeded. In 1978 20% of dogs were given as gifts whereas last year this figure was just 1.8%.