I want Harper girls to give football a chance, you don’t need to have even played before, just be willing to get stuck in. 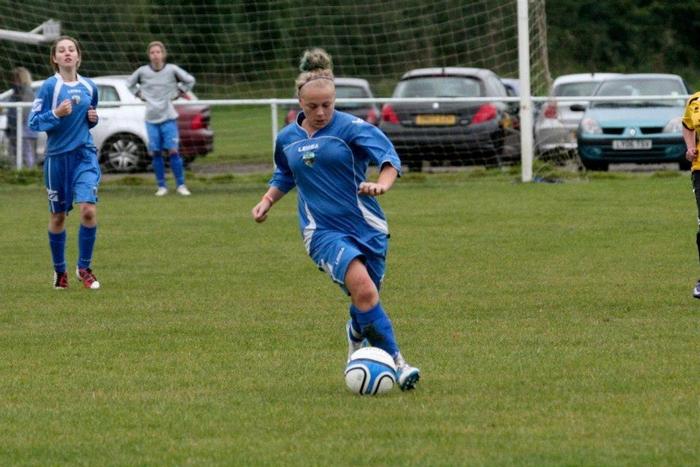 19-year-old fresher, Jaime Duggan, is hoping to bring her enthusiasm for sport to Harper Adams University, by re-forming the ladies football team.

Jaime, who is studying FdSc Animal Management and Welfare (Extended), plays for TNS Ladies Football Club in Oswestry and is a reserve for England.

She has been playing football since the age of five and is hoping to recruit enough Harper Adams students to form a new ladies team.

Jaime, a Wolverhampton Wanderers (Wolves) fan from Telford, said: “I like playing football because it keeps me fit and is a good way to make new friends.

“I want Harper girls to give football a chance, you don’t need to have even played before, just be willing to get stuck in.

“You never know where it might lead beyond that.”

Jaime trains with TNS up to three times a week, enjoys watching games in her spare time and has also achieved her coaching badge.

She added: “Thanks to the Olympic Games, ladies football is really progressing and becoming more popular. With more investment, it could grow even more.

“I managed to get tickets to see the USA vs. Canada match at Walsall. It was also great to see the sport on TV and in global news coverage.”

Despite living at home and driving to Harper Adams each day, Jaime has been made to feel welcome by other students and has enjoyed the social life so far.

She said: “I came to Harper Adams for an open day and was impressed by how friendly and welcoming everyone was.

“Harper also has a great reputation and people are impressed when you tell them it’s where you study, plus the course was right for me.

“Even though I’m living at home I’ve been able to take part in the social events on campus including the Freshers Ball.”

Jaime is aspiring to work in the animal welfare industry at the RSPCA, a safari park or a zoo. She is also aiming to gain work experience and hopes to spend her placement year at Longleat in Wiltshire.