The Harper Adams University campus was awash with celebration on Friday, as hundreds of students graduated, embarking on careers across the agri-food sector.

Before they passed across the stage, the graduands were thanked by the University's Vice-Chancellor for their valuable contribution to the success of Harper Adams.

"Our students have, once again, demonstrated that they are some of the most able in the UK, and within Europe... Your contributions have been immense - involving not only your academic endeavours but also those of the Students' Union, many clubs and societies, a huge array of sports teams, your representatives on academic committees and on the Board of Governors.

"In June this year, we won a university sector award for Excellence in Student Experience and we were recently ranked by YouthSight as the fourth most welcoming university in the UK - after Cambridge, Oxford and St Andrews.

"Our employment rate for those graduating in 2013, at 96.2 per cent, was in the top 15 of the 166 institutions in the higher education sector. And to cap it all, earlier this month, we were shortlisted in the prestigious Times Higher Awards in the category for University of the Year."

The students were each personally congratulated by NFU President Meurig Raymond, who received an honorary doctorate for services to agriculture, and opened his address with a welcome to the next generation of agri-food professionals.

"At heart, farming is about people, and Harper's case the next generation," he said. "Fresh ideas, new approaches and change often come with the next generation of farmers: every industry needs new blood and fresh thinking to re-energise and challenge set ways and out-of-date approaches."

Mr Raymond went on to praise Harper Adams University as a centre of innovation: "Everyone who visits Harper Adams cannot fail to be blown away by the investment in and focus on innovation and research - there is nowhere better to see the appliance of science!

"The next generation, as well as the current crop of farmers, will find Harper Adams an inspiring place, a place of ideas, a place to learn to challenge the traditional and blend the best of the past with the promise of the future.

But the future is not without it challenges, Mr Raymond said, reminding the graduating class of the predicted need to feed a UK population of 70 million by 2030. "The NFU is working on an agricultural growth plan to ensure that UK farmers meet more of the domestic as well as the export market.

"For this we need to create the conditions for competitive, profitable farm businesses to thrive and a flexible and professional workforce to join the industry. As one of only two farming universities, Harper Adams places farming on par with other professions and your growing student numbers show real confidence in farming's future." 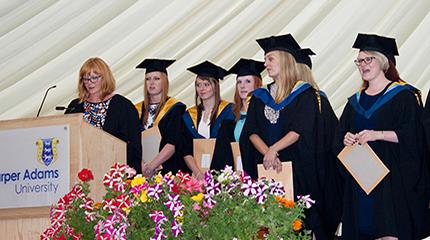