"...to become part of the family of Harper Adams University is a very precious thing"

“You will continue to draw on your experiences gained here and enjoy the friendships forged here for the rest of your lives,” said Roger Mercer, Chairman of the Harper Adams University Board of Governors, to the Class of 2014 as they graduated on Friday.

“I would urge you to use the education you have gained combined with your youthful enthusiasm to vigorously pursue your careers and I would urge parents and employers to encourage this precious resource and allow it to develop. You have lots of opportunities, so go out and make the most of them!”

University Vice Chancellor Dr David Llewellyn added: “Thank you for acting as such good ambassadors during your time with us, a role that we hope will continue as you embark on your careers.  Enjoy the ceremony, good luck for the future, and please stay in touch.”

Receiving awards alongside more than 600 undergraduate and postgraduate students were three key figures from the agricultural sector, who received honorary doctorates.

Mr Meurig Raymond, President of the National Farmers’ Union (NFU), was recognised for services to agriculture, in recognition of his contribution over many years to the NFU.

Mr Raymond was also the graduation ceremony guest speaker. He said: “I feel extremely honoured. It’s one of the happiest days of my life, to be awarded this honorary degree at such a well-respected educational institution. Huge congratulations to all of the graduates. It’s a fantastic day in their lives. The majority will be entering the food and farming sector which I believe is going to be extremely interesting and exciting over the next 20 years.”

She said: “This is a great honour for me. This university has such grounding in everything that I believe in, in terms of good solid agricultural education and great innovation: research in agricultural sciences. So to become part of the family of Harper Adams University is a very precious thing. It’s really important for everyone graduating from Harper Adams today to be very proud of what they have achieved, to hold their heads up and to know that they are graduating from one of the finest agricultural universities not just in Britain but in the world.”

CEO of Frontier Agriculture, Mark Aitchison, receiving an honorary doctorate for services to agriculture, added: “I feel very privileged and honoured to be recognised by the university for my contribution to the industry. I was here in 1984 as a postgraduate on the crop protection course so I feel as if my career has possibly come full circle. We recruit five or six Harper Adams graduates a year into our business so I know the university very well and I have lots of admiration for what is going on here.” His advice to the graduates was: “Always go for a career in something you enjoy. Life is a journey and lots of people will pull and push you in different directions but if you really love what you do, go with your heart and enjoy your career, because that way you will be very successful.”

At the heart of graduation lie the students. William Copland, graduating with a Batchelor of Engineering degree in Off-Road Vehicle Design, with first class honours, said: “It has been a fantastic four years, I think it has set me up well for industry and I am looking forward to getting out there and getting started. I have a job with Jaguar Land Rover, working in chassis development” – a job he has wanted for three years.

Beth Bason, BSc (Hons) Countryside Management, said: “I have finally made it! I work at a care farm in North London helping people with mental health problems, learning disabilities and physical disabilities to get back into the community through farm work.”

Ellie Krayenbrink, BSc (Hons) Agricultural Engineering, said: “The four years have gone really quickly but it feels really good to be graduating. I am coming back to Harper Adams for another year to complete a Masters in Precision Farming then I hope to take that forward into industry. I am really looking forward to a career in engineering.”

BSc (Hons) Food and Consumer Studies graduates Niall Massingham and Sophie Zealand were both delighted to have their families joining them for their special day. Niall is working as Ripening Manager at Organic Farm Foods and Sophie has joined the graduate programme at Foyle Foods, in Gloucester.

Grace Kempthorne was thrilled to have topped up her degree to BSc (Hons) Agriculture with Animal Science, and is now working with Andersons in Yorkshire as a trainee farm business consultant. And Gillian Wilshire, BSc (Hons) Rural Enterprise and Land Management, was happy to be back on campus to graduate, having starting full-time employment with Carter Jonas in York, where she also completed her student placement.

Alex Jones, BSc (Hons) Agri-food marketing with business studies, said: “I have just finished my harvest job and I am off to Australia in November so I am really excited. It has been a great four years – I have had my ups and downs but I would do it again without a shadow of a doubt.”

James Johnson, FdSc Agriculture, felt prepared to go back and join his father running the family farm, using the knowledge gained at Harper Adams to take on new opportunities and put new ideas into practice. And William Foyle was “over the moon” with his first class honours degree in Rural Enterprise and Land Management. He is returning to Harper Adams to complete a Master’s degree in agri-business.

Professor Wang Hiumin, presenting degrees for the programmes run in conjunction with Beijing University of Agriculture (BUA), said “This is my second time joining a graduation ceremony at Harper Adams. A big difference this time is that Harper Adams has been awarded university title. On behalf of BUA I would like to extend my congratulations to Harper Adams University and to all graduates of 2014.”

Student President Thomas Mountain gave a vote of thanks on behalf of the graduating class to guest speaker Mr Raymond, other honoured guests, Harper Adams staff and the families and friends who supported the students throughout their courses. 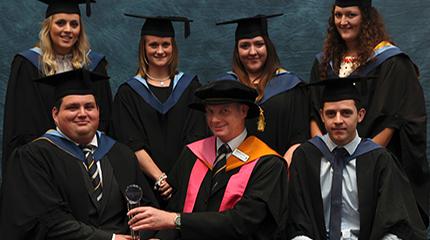 The Harper Adams University campus was awash with celebration on Friday, as hundreds of students graduated, embarking on careers across the agri-food sector. Posted 22 September 2014