“We believe that this is the only long-term international study focusing on soil management techniques where the interaction between traffic management practices and different tillage practices are considered.” 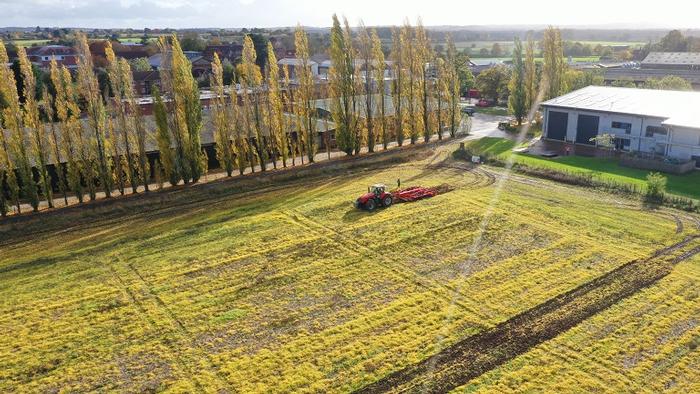 The Traffic and Tillage research site at Harper Adams University

The value of long-running research into soil improvement has been highlighted at industry conferences.

Findings from the Traffic and Tillage project, which began at Harper Adams University in 2010, were presented by Project Lead Dr Paula Misiewicz at the Institution of Agricultural Engineers (IAgrE) conference in Peterborough on November 1.

The research was also examined in depth at a special Soil and Water Management Centre event, which drew together experts in soil health, engineering, agronomy and more alongside industry representatives to examine the impact of the project.

Opening proceedings, Harper Adams Visiting Professor in Engineering Richard Godwin said: “We believe that this is the only long-term international study focusing on soil management techniques where the interaction between traffic management practices and different tillage practices are considered.”

Each were used on a field with wheat, barley and oats in crop rotation, showing how both traffic management and tillage systems can have significant effects on crop yield and farm economy - together with soil biology and health.

Two samples collected from the experimental site were shown during the conference. Dr Misiewicz explained: “Both are from our controlled traffic farming plots – the first was not tilled for 10 years and the second was deep tillage - down to 250mm over the same time.

“While they demonstrated very little difference in crop growth, there were large differences in soil structure, stability and resilience - with deep tillage showing loose soil at high risk of soil damage.”

Among other academics who presented their work at the event were Dr Ed Dickin, Senior Lecturer in Agronomy, who examined crop yield, Dr Simon Jeffery, Reader in Soil Health who discussed at soil carbon alongside Ana Prada Barrio, a PhD Student in Traffic and Tillage, and Professor of Crop Physiology and Co-ordinator of the Drought Mitigation Group Peter Kettlewell, who explained the work he had been carrying out looking at drought stress.

Dr Dickin noted that deep tillage gave no yield advantage over shallow tillage, with the latter offering the best compromise between yield and soil structure. “The benefits of mitigating traffic via low pressure tyres and controlled traffic farming appear from the start of the system and are consistent over time,” he said.

Dr Jeffery explained how his research had demonstrated that, depending on the way soils were managed, they had the potential to store differing levels of soil organic carbon – a component of soil organic matter. Having shown this impact of soil management on carbon levels, the next steps of the project will use millet and trace the flow of carbon from the plant to the soil.

Dr Jeffrey added: “It will be possible to trace the flow of carbon from the plants into the different organic matter fractions.

“These have different turnover times and dynamics within the soil and so this investigation will provide insights into the mechanisms that determine the residence time of carbon in soils - and so will help inform as to best practices for maximising carbon sequestration - improving soil health and helping to mitigate climate change.”

Mr Dines explained that the TopDown primary cultivator which has been used on the experiment site from the start and the impact its key design features have had on the work. “Its flexibility means it has been an ideal machine when used in the plots to produce the desired result.

“In the shallow plots we use the front discs and rear packer only working to a depth of 10cm. In the deep plots the discs still work at 10cm and we bring the tines into work to a depth of 25cm, the packer remains the same with some weight applied to achieve some consolidation.

Finally, Mr Saunders explained how the use of low pressure Michelin Ultraflex Technology tyres had shown that a four per cent improvement of crop yield is achievable.

“As the only touching point between farm equipment and the soil, tyres play a vital role in preventing compaction. The Ultraflex Technology range of are designed for all kinds of agricultural machinery, covering the entire crop growing cycle.

“Michelin has developed these tyres to enable farmers to operate their equipment at lower pressures than conventional technology tyres, protecting soil structure and improving yield in the process.” 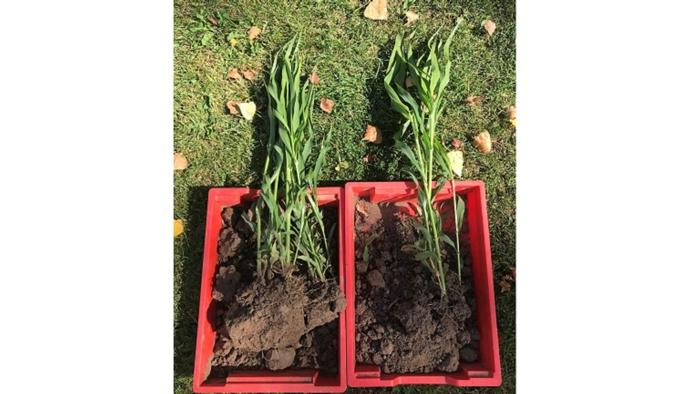 Two samples collected from the experimental site – the first was not tilled for 10 years and the second was deep tillage - down to 250mm over the same time.