The UK is about to embark into a new era of international trade, with little certainty regarding the continuance of trade with the EU on the same basis as that enjoyed whilst a member of the European Community. Close scrutiny of the implications of trade deals agreed in the future is essential so that the industry can prepare itself for what could be a period of significant change. The International Agri-Food Trade Network (IAFTN) model developed by Dr Daniel May takes into account factors and parameters affecting trade agreements that are far beyond the capacity of every other model currently available. The team from Harper Adams University will work closely with staff from AHDB to develop robust and more realistic predictions of the impact of trade deals on the sectors.

Trade models used to provide assessments of agricultural and food policy reforms (such as the partial equilibrium modelling frameworks used in the FAPRI-UK model) are characterised by a number of key assumptions that do not reflect the important dimensions of agricultural and food chains across and between most countries (Devadoss et al, 1993; Soregaroli et al., 2011). This project uses a novel international trade network approach which belongs to a new branch in economics referred to as economic networks. The International Agri-Food Trade Network (IAFTN) model developed by May (2018) is such a model and will be used to analyse the impacts of trade agreements between multiple countries.

The IAFTN is a modelling approach that considers a number of features that are present in the agri-food sector (e.g. intermediaries with market power in the supply chain, intra-industry trade, policy biases, and famers asymmetry in productivity, among others). This makes the IAFTN model unique and different from other existing approaches that are based on the standard assumption of perfect competition. This allows the IAFTN far more flexibility in terms of the ability to predict trade outcomes and to assess these predictions under different scenarios and consider the real and different features of a sector. In addition, the IAFTN can not only make predictions that are much more closely aligned with the current market structure of the agri-food sector, but it can also assess the stability of a new bilateral agreement, and possible posterior trade evolution paths.

We know in the real world that markets, food chains and trade do not operate under perfect competition - which is the core assumption to previously used trade models. Given the market power of intermediaries, such as large supermarket chains and different sized markets, as well as the multitude of trade agreements the UK and their trading partners can have with other countries, simple country to country perfect competition trade models fail to take these realities into account. This novel trade network modelling approach considers trade agreements in a world with imperfect competition.

As the Brexit transition period ends on 31 December 2020, understanding the impacts of international trade agreements is more vital than ever. Areas of concern such as tariffs, food standards and the competitiveness of farmers and food chains between trading countries are taken into consideration by the IAFTN model.

The project was awarded as part of a tender process and will run until the end of 2023. The forecasts from this work will be used to inform AHDB reports and these reports can be found at https://ahdb.org.uk/ 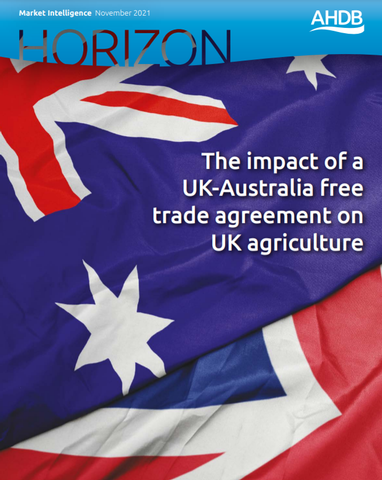